With only 3 weeks until Mt. Whitney, it was time for an extreme day hike to put my endurance to the test. We opted for a new trail, the Bear Canyon route up Mt Baldy which climbs about 6000 feet over an unrelenting 6 and a half miles.

Dog Friendly: Yes, but only attempt this with a trail proven dog

That second margarita on Friday night was a bad choice. With a table full of fajita fixings in front of me the decision seemed justified, but upon waking up on Saturday with a mild headache and hearing Marissa say my breath still smelled like margarita, I realized I had made a grave error.

The original plan was to get to the Bear Canyon trailhead early before the summer heat hit the mountain, yet the late start had us arrive at the parking lot at 10:45am ensuring we’d be hitting the trail at the hottest part of the day. I compensated for the heat by taking 5 liters of water, which loaded down my backpack significantly in conjunction with my camera and a few other pieces of gear. Callie got off easy by not having to carry anything at all. The hike was going to be too hot and too long to expect her to carry her pack.

The hike up Bear Canyon starts up Bear Canyon road. You can park anywhere near the start of Bear Canyon road off the main Mount Baldy road. After walking up the road for about a half mile you’ll reach the trailhead and the trail. Only 6 miles to go! Don’t mind the fact that they’ll likely be some of the hardest 6 miles you’ve ever done.

This is the original trail that went up Mt. Baldy, so it is often referred to as the Old Baldy Trail. Back then, men had giant mustaches and didn’t need chairlifts to cart them up a mountain.

The start of the trail isn’t too punishing though, and it acts as a nice warm up for what is to come. You spend most of the first mile and a half slowly ascending through dense forest that provides abundant shade. There are a few exposed stretches here, but for the most part it is a pleasant walk in the woods.

The elevation gain here is also much less steep than the upper parts of the trail. Callie and I powered through this stretch very quickly and for a fleeting moment I thought this hike wouldn’t be too hard after all.

About 2 miles into the hike we reached Bear Flat. The trail exits the woods into a meadow with a stream rolling through it. The hill above Bear Flat looked pretty barren with no shade at all. It turns out this was from a fire in 2008 that came through the area. With the summer sun beating down on us, the stretch was going to be painful to slog through. I let Callie stand in the creek for a few minutes to cool her paws and hydrate as much as possible.

From here, the trail immediately becomes steep and completely exposed. The mid-day sun was beating down on us, and the trail was reflecting heat back up at us. There was no sanctuary from the heat and the only option was to power ahead as quickly as possible. 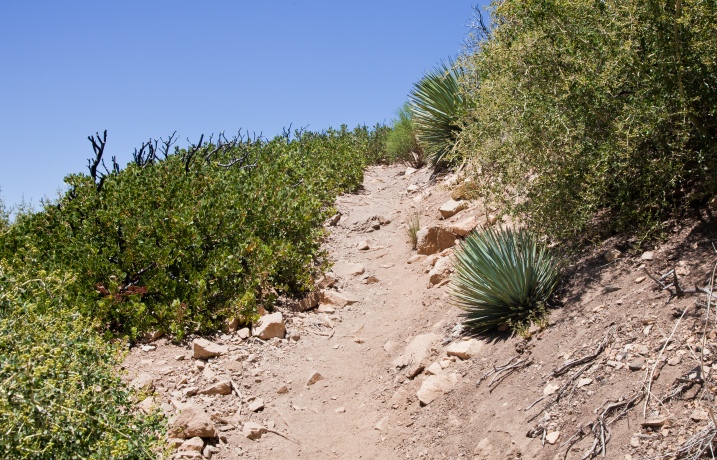 Callie adopted a technique to deal with the excessive heat. She would run ahead of me on the trail and then wedge herself into a bush to get herself partially into the shade. Walking down the trail, all you could see of her would be a leg or tail sticking out onto the trail from the brush. Once I had passed her and gotten down the trail a bit ahead, she would get back up and quickly run ahead of me to her next shady spot up the trail.

Callie continued this routine as we slowly made our way up the hot steep slope. Midway up the trail I stopped to take in the view of Icehouse Canyon and the Three T’s. This hike is on my short list of hikes to do in the region, and it was cool to see the whole thing in one view. 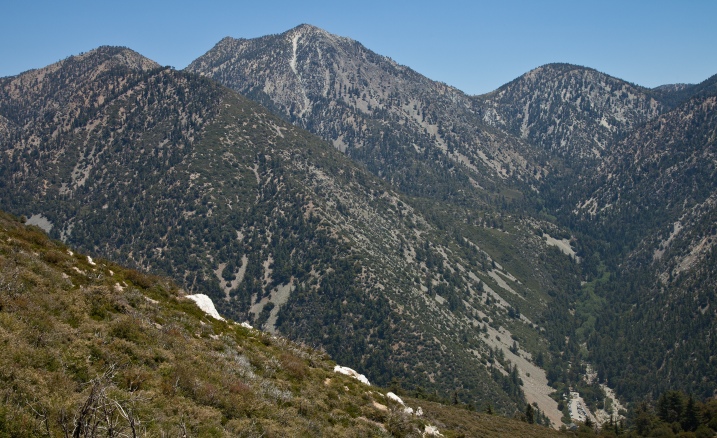 As I took some pictures, I was accosted by some deer flies and received a couple painful bites in short succession. We quickly packed it up and continued to move up the unforgiving trail. With the flies hounding me whenever I stopped and a complete lack of shade, there was no choice but to power all the way up the slope until we hit the ridge. We quickly climbed about a thousand feet in the hot sun. It was some of the most hellish hiking I’ve ever experienced. I cursed the second margarita as I sweat it out in the afternoon sun.

Coming around a bend I saw the ridge right in front of us, complete with a few scraggly trees. Never before have a few pine trees been a more welcome sight.

We took an extended break in the shade to allow us to cool down and re-hydrate. Callie was extremely appreciative to have some shaded ground to sit on. 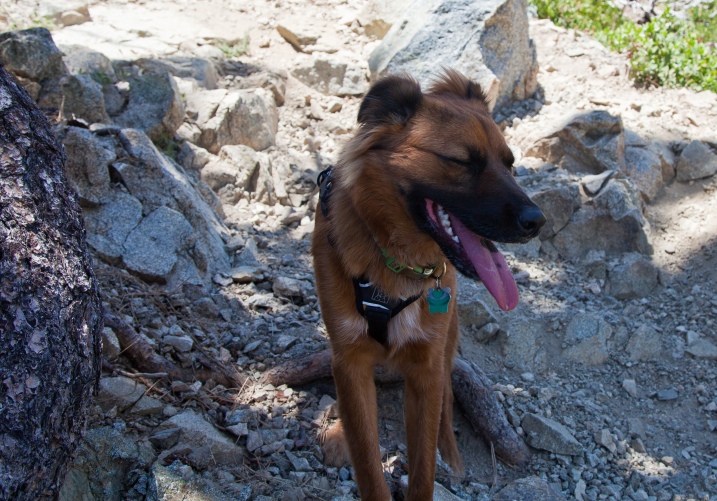 From here, the trail goes along a ridge moving North towards Baldy. There are trees scattered along the ridge which provided much needed refuge from the heat.

Callie continued to move ahead of me on the trail so she could wait and rest in shaded areas, but she seemed to be much cooler and in better spirits.

While the constant sun exposure and swarms of biting flies were gone, the trail was still a relentless push upwards. A section of the ridge here was not only extremely steep, but it also featured a ton of loose soil and uneven rocks, making it a very tiring and precarious climb up.

I suddenly hit a wall. Up until this point, I had been hiking at a fairly fast pace and had only taken the one break when we reached our oasis at the start of the ridge. My energy levels had dropped significantly, and with another 2000 feet of climbing left, it was time to stop and get some food in me. I had foolishly attempted to make the climb without eating any food on the trail, and my energy reserves had run out. After a couple of breaks where I ate as much food as my stomach would allow, my energy levels began to return to normal. This was an important lesson to learn for my Whitney climb later in the month. When doing extended hikes at high altitude, you have to constantly eat as much as you can to keep fuel in the tank.

With my energy and spirits raised back up, Callie and I coasted up to the trail. Up above 8,000 feet in the mountains, the temperatures had dropped off to the moderate mid 60’s, and a light breeze going over the ridge helped cool us off. Life was good. We reached the top of the ridge and were given our first proper view of Mount Baldy, along with West Baldy to its left. The trail crosses a narrow saddle here that is reminiscent of the Devil’s Backbone trail. Nothing too sketchy but a tumble could be very dangerous.

At the saddle we ran into a couple of hikers who were descending with their dog. They had stopped short of the summit when they noticed that their dog had cut its paw. I offered up some of my canine first aid supplies but they seemed secure with the tape they had used to close up the wound. The dog seemed in good spirits but I worried about how it would handle 5,000 feet of descent on an injured paw. With that in mind, do not attempt this hike with your dog unless it is regularly on the trail and has conditioned their paws and body to withstand the conditions. A lot of the trips that Callie does would not be pleasant for many city dogs.

The rest of the hike went by very quickly and painlessly. The final stretch to the summit always seems to provide a second wind. As we pushed towards the summit, Callie left me in the dust so that she could greet all of the fellow summiters.

We had reached the summit in 5 hours. I had initially hoped to do it in 4, but sustaining over 1000 feet an hour in the heat felt like enough of an accomplishment. After a few minutes of enjoying the 360 degree views from the peak, I tried to get Callie to pose for her 3rd Baldy summit of the year. She defiantly sat down and licked her chops in protest as I took her summit pic. So much for her being tired. 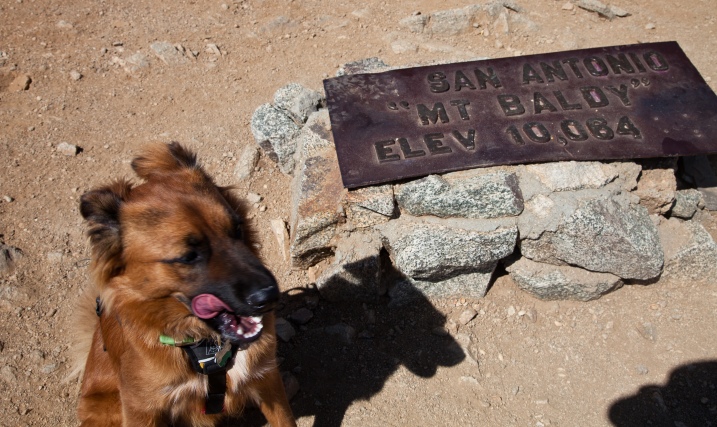 After 15 minutes on top we began the descent at 4PM. Walking across the saddle towards West Baldy, there is a nice view looking west through the San Gabriel Range. The mountains were obscured by the smog and general “June Gloom” of the Greater LA area. 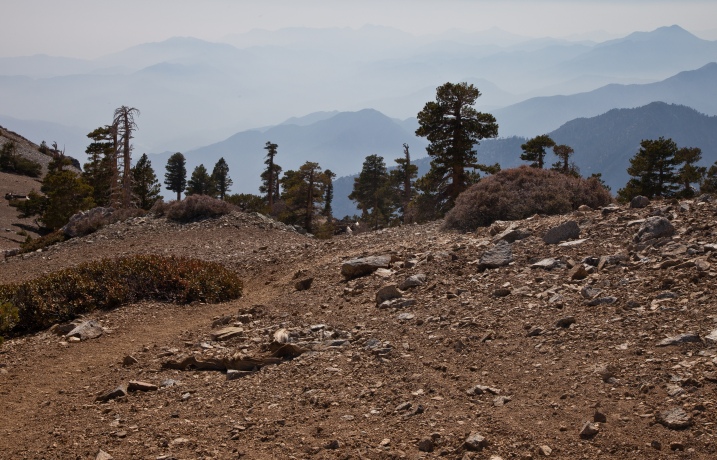 Soon we were heading back onto the ridge. Facing downslope, the trail is clearly etched into the mountain with a great expanse of nothingness behind it. It feels like you are walking on the moon.

As we descended the ridge, there were many windows to the west featuring the rolling foothills on the San Gabriel Range. The afternoon sun shining through the smoggy conditions created a nice layering effect. I dubbed them “The Great Smoggy Mountains.” 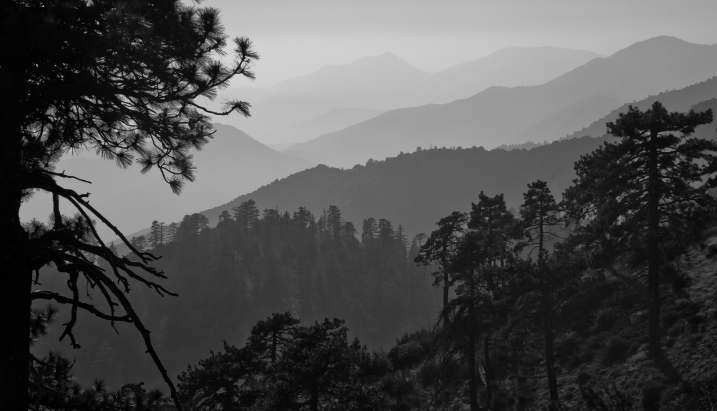 The steep and loose section of the ridge trail was even more of a beast going down. I took it slow and still managed to slip a few times. Trekking poles were a lifesaver here.

Once past the loose section on the ridge, the rest of the descent was pretty easy. We quickly moved through the exposed section that had been so hellish earlier in the day, and before we knew it Callie was taking a break cooling her feet at Bear Flats.

I spoke to a few fellow hikers at Bear Flats, and after a brief discussion it became clear that they had intended to go down the Ski Hut Trail to Manker Flats and had made a wrong turn. They were going to exit the trail about 5 miles away from their car! I imagine this mistake is made pretty frequently. Fortunately, we recognized the mistake and I was able to offer them a ride back up the mountain. Crisis averted. They were on a Whitney training hike too and we both shared our information and excitement about our upcoming Sierra adventures. As we all hiked down the final section of trail together, the trees basked in soft light as the sun set behind the mountain. It was a serene way to end a long day on the mountain.

I took the last sip of my water right as we reached my car at 7pm. 8 hours of hiking and 5 liters of water later, the epic hike up Baldy was finally over.