It snowed in our local foothills this weekend and Callie was on the scene to investigate.

Snow hiking is one of the best kept secrets in Los Angeles. Staring at the LA skyline while standing in the snow never gets old. Plus, how many big cities allow you to hike in the snow on mountains reaching up to 10,000 feet, all within an hour drive from your home?

There are a few trailheads in the San Gabriel mountains that will consistently provide you with some snowy trails in the winter. They are primarily located near Mount Baldy Village and in the highest parts of Highway 2. While these are the areas where snow tends to stick throughout the winter, cold storms can bring snow levels down as low at 2000 feet. The snow usually only lasts for a day or two at most, so timing is crucial to take advantage.

Callie loves hiking in the snow more than anything else, and I’m always on the lookout from our Altadena home waiting for the right moment. This past Saturday morning, I awoke to white capped mountains outside my kitchen window and started packing my daypack and Callie’s pack.

We opted for the Cobb estate trailhead, and hit the trail at about a quarter to nine. Halfway up the lower Sam Merrill trail, there was evidence of snow but it was quickly melting off. We moved up to the top of Echo Mountain as fast as we could without any stops.

At the top of Echo, there was still a dusting of snow in the shaded areas. We pressed onwards to the Castle Canyon trail to gain elevation.

About halfway up the trail we ran into our first significant section of snow. Callie went into berserker mode as per usual.

Inspiration Point was as crowded as I’ve ever seen it. Turns out there was a group of 15 people in a wilderness course there. Plus, clouds were quickly forming and there was no longer any view down towards LA. We forged ahead to try to create some distance.

Half mile down a fire road from Inspiration Point, we hit the Upper Sam Merrill trail. There is a West and East trail which circumnavigate the summit of Mount Lowe. We ascended the East Trail. 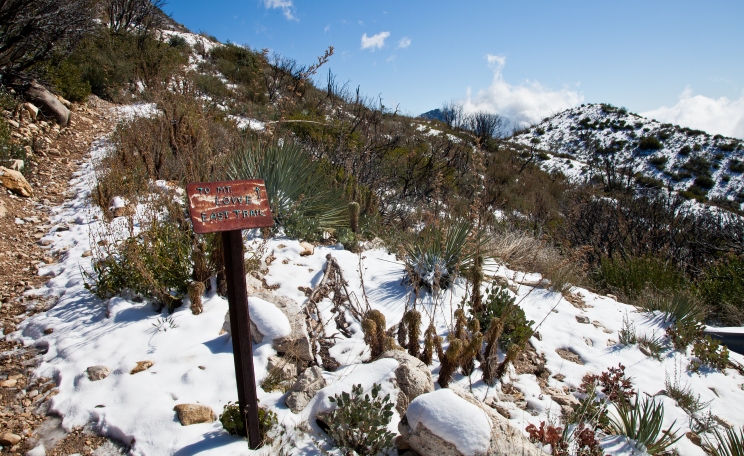 Away from the crowds with no sound other than my feet crunching in the snow, we had finally achieved some solitude.

The thick clouds prevented much of a view, but they also helped preserve that sense of isolation.

As we rounded the side of the mountain, the peaks of Mount Disappointment and San Gabriel peak came into view. By the time we reached the summit area, it was grey in all directions.

Take in the view…

Hiking down the West Side, we crossed the burn line from the Station Fire again. The stark contrast of the burned forest quickly gives way to a more peaceful forest setting.

Then, as the trail rounds a bend on the Middle Sam Merrill trail, the view of Los Angeles pops up. Sunlight beat directly onto the trail now and any traces of snow was gone. This trail is like the lower Sam Merrill, but much more pleasant. There are sweeping views the entire time, and none of the crowds found on the lower trail.

Still a long ways to go to the bottom… Even the upper ruins hardly get any visitors.

The lower Sam Merrill trail is one of the most popular trails in LA. Its close proximity and great views make it a destination for trail runners and anyone looking for a quick escape. As we hiked down it in the late afternoon, we passed people at least once a minute. I remembered why we rarely hike this trail despite living a mile away from it.

Looking to the west, the ocean glowed from the afternoon sun and created silhouettes of the West LA skyline.

At the bottom of the trail, it was a beautiful afternoon with no evidence of winter. Another typically glorious winter hike in Los Angeles, with some actual real winter sprinkled in.

8 thoughts on “Snow on the Sam Merrill Trail: Cobb Estate to Mount Lowe”