Taking advantage of another dry winter, Callie and I went on an early season Sierra trip up to Matlock Lake.

After getting up early on Saturday morning, Callie and I found ourselves at the Onion Valley trailhead at 10:30AM with a permit to go up to Matlock Lake for the night. Part of what makes the Southern Sierra so special is how easy it is to access from Los Angeles. A 3 hour drive gets you to some of the best hiking in the world.

The parking lot at the trailhead was a ghost town for mid day on a weekend. There were 8 cars scattered throughout the lot. Last year when I parked there on a Saturday afternoon in mid July, there were close to 100 cars in the hikers parking lot. This is a great time to get up to the mountains if you can, they are mostly devoid of the summer crowds that will soon be populating the trails.

Additionally, there were no mosquitoes on the trip and the weather was perfectly temperate. The meadows are mostly green, rivers are flowing, and the high peaks still have some large snowfields to further enhance their beauty. This is the best time to be in the Sierra, and we felt lucky to be there. Every day in these beautiful mountains feels like a blessing, and with such great conditions it is hard to not be continually reminded of that.

The trail starts at a little over 9,000 feet elevation and gradually ascends about 1300 feet over a couple of miles towards Gilbert Lake. Similar to most Eastern Sierra canyons, there are massive cliffs circling the trail on 3 sides, and looking back there is an expansive view into Owens Valley. To top it off, tiny waterfalls were cascading down the cliffs all around thanks to the early season snowmelt. I rushed through this section last year on my Circle of Solitude trip as I pushed into Kings Canyon, so it was nice to spend some time to savor the trail and take some photos. 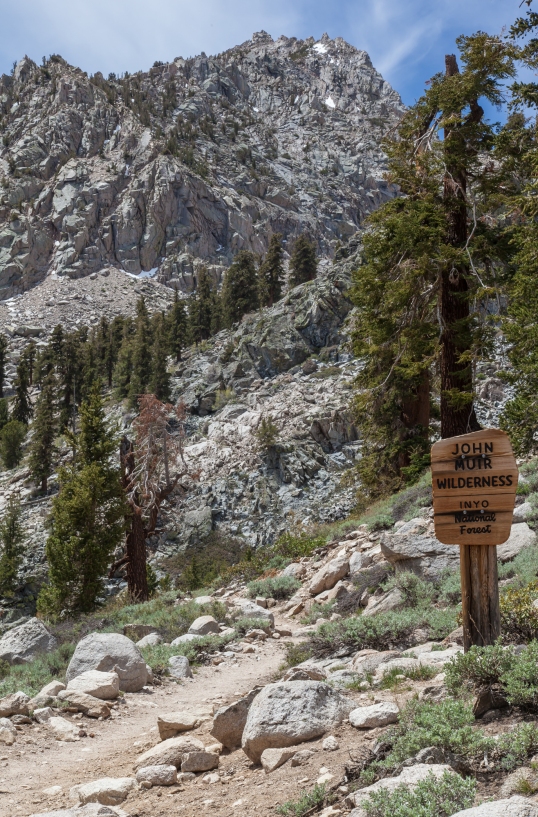 Callie has been a little cooped up lately. So, she was beaming once we hit the trail, seemingly indifferent to the 10 pounds of gear that she was helping carry up.

I reminisced about her first backpacking trip almost exactly one year ago, and marveled at how much she has matured since then. After many miles of hiking together, she has learned my rhythms and stops whenever I pull out my camera, patiently waiting for me to begin walking again before she turns her attention back to the trail.

Despite the relatively empty parking lot, we were surprised to see a small parade of hikers heading down the trail. They were all clearly PCT thru-hikers, and we enjoyed getting to meet them and hear about conditions in the backcountry. Callie greeted them all with cheer and a few hikers who were missing their dogs at home stopped and spent some time to enjoy her presence.

After a few leisurely hours of hiking, we were at Gilbert Lake. There were already a few people there, so I chose to continue on to Matlock Lake instead of linger at Gilbert or Flower Lake. The trail to Matlock Lake is not marked on most maps, and prior to this trip I had a hard time finding much information on it.

To find the trail to Matlock Lake, go to the eastern shore of Flower Lake, and then move to the South and you should see a trail heading up the hill in a South-Southeast direction. The trail is actually very well maintained, despite not being well labeled. It is approximately 3 quarters of a mile long, and it ascends and descends about a hundred feet. The first part of the trail faces North, so there were a few patches of snow along the trail but it was clear the entire way. It appeared as if it had just melted out enough a few days earlier. Callie enjoyed playing in the snow while I enjoyed the view towards Kearsarge Pass with Mount Gould in clear sight. 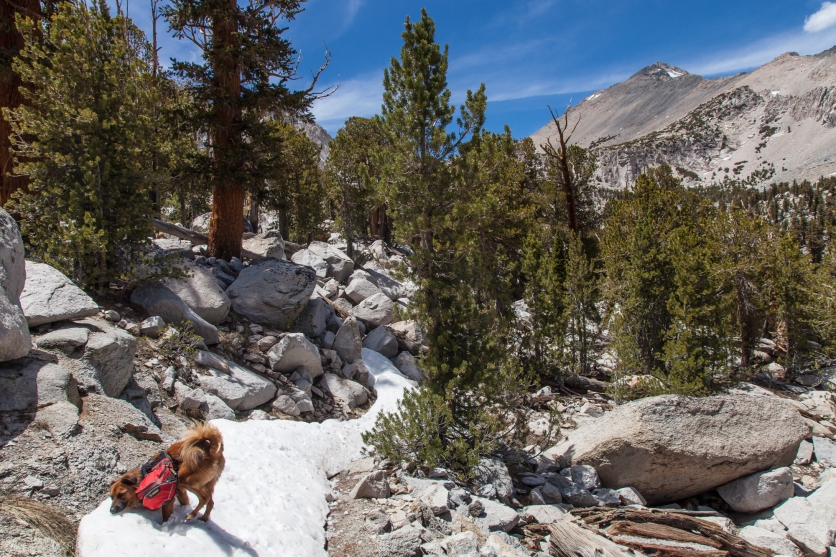 The trail is pretty flat by Sierra standards and after a brief stroll we were at Matlock Lake, which we would have all to ourselves for the rest of the day. The trail reaches the lake at a well used campsite. There are dozens of them throughout the area though, so there’s no need to camp right on the lake shore in plain view. 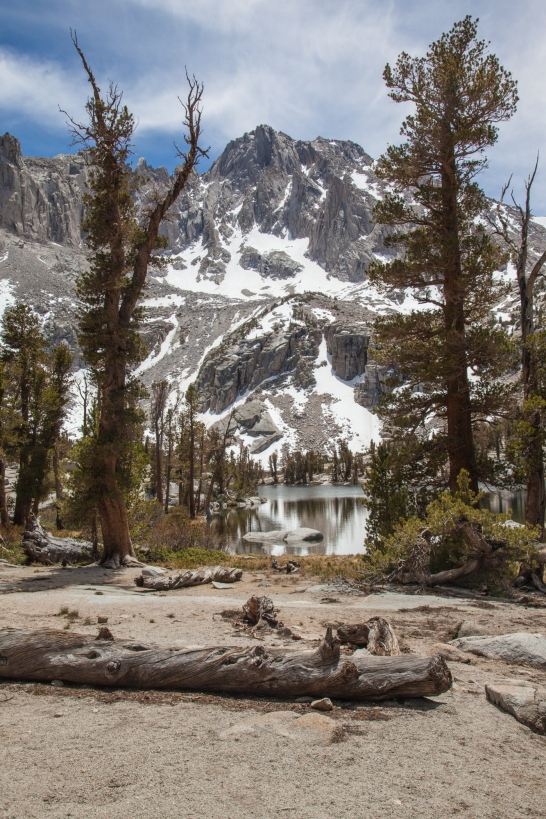 After walking around the lakes, I busted out my new REI Flexlite Chair on the shore of Matlock Lake and soaked in the scenery. This is a new purchase, bought in anticipation of many of similar trips with my son. For this trip, it was a great addition as it gave me a comfortable way to take the weight off my still injured toe. It packs in at 1.5 pounds, which means it is ludicrous to take on an extended backpacking trip with a lot of miles but easy to throw in the pack for a quick overnight trip. I sat on the lake shore staring at University Peak with nothing but the sounds of birds and running water entering my conscience. It was a profoundly peaceful experience. 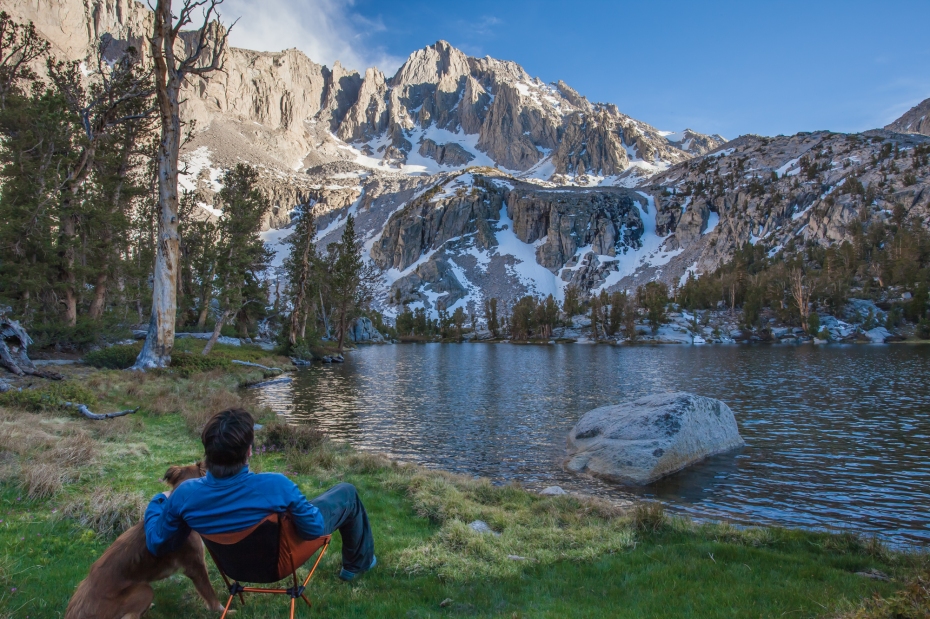 As the afternoon wore on, the wind picked up and took away any hopes of getting a good reflection of University Peak on the lakes. I worked with the conditions as best as I could, but now I have another reason to come back to this gorgeous lake again.

The wind continued throughout the night, and I didn’t even bother trying to photograph sunrise. The light over Matlock Lake seems better at sunset anyways, but regardless, the conditions did not inspire me to hustle around the lake in the early morning. Instead, I relaxed with a cup of coffee and a muffin and enjoyed the scenery some more before packing up camp.

By 10AM, we were back at Gilbert Lake, staring at the seemingly endless expanse over Owens Valley. 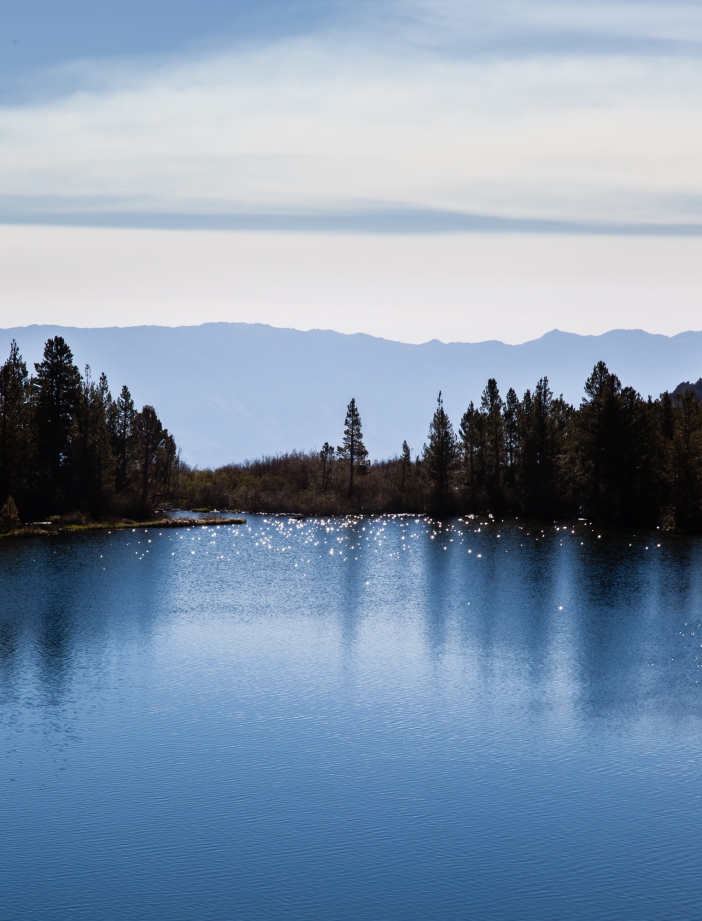 As we round the lake to its Eastern shore, I pulled out my camera again for another shot, and I noticed Callie beside me staring intently across the lake. I followed her gaze and noticed a black bear on the lake shore. It was probably less than a hundred feet from me when I took the previous shot, but we hadn’t noticed each other. I quickly leashed Callie up to be extra careful, and we watched the bear for a bit before it scurried up the hill into the woods.

The next couple of miles back to the car took less than an hour. The drop into Owens Valley dominates the view the entire time. 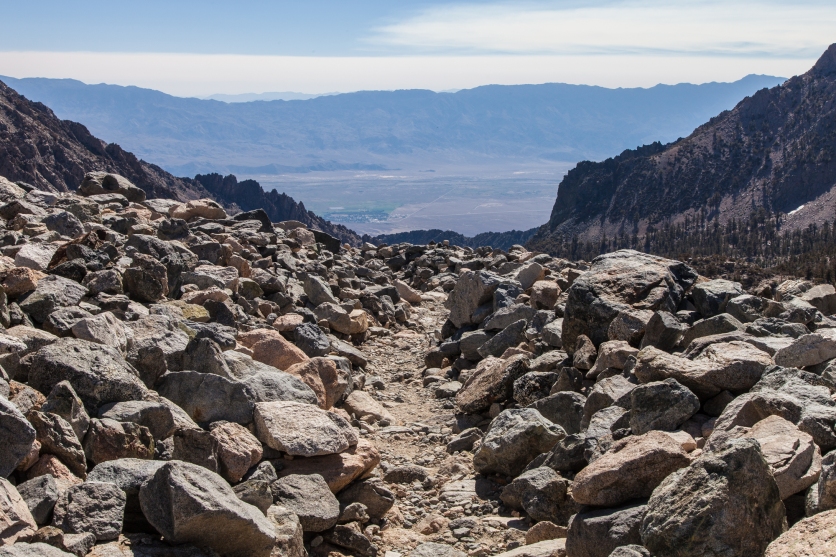 On the drive home, the Mojave desert was thick with smoke from the Powerhouse Fire which was still raging visibly on the hillside beside Palmdale. It was a remarkable sight, and an ominious sign for what the summer might hold for the Sierra.

All the more reason to get out now if you can.

21 thoughts on “Onion Valley to Matlock Lake: The Great Escape”