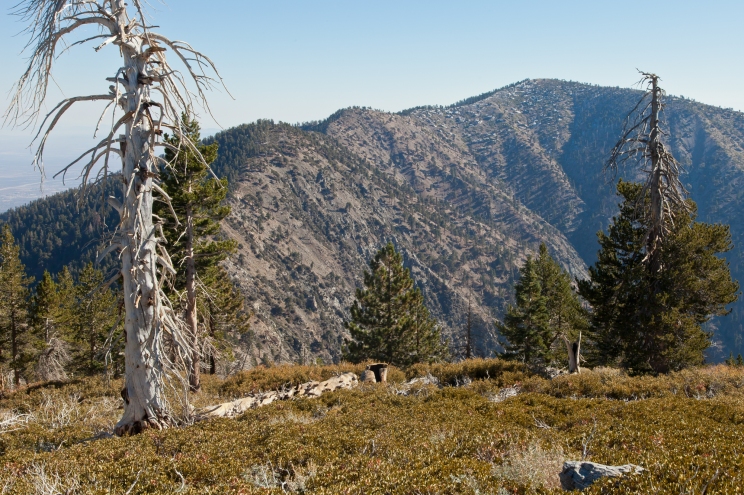 This relatively moderate hike offers a taste of the Pacific Crest Trail and easy access to three 9,000 foot peaks. 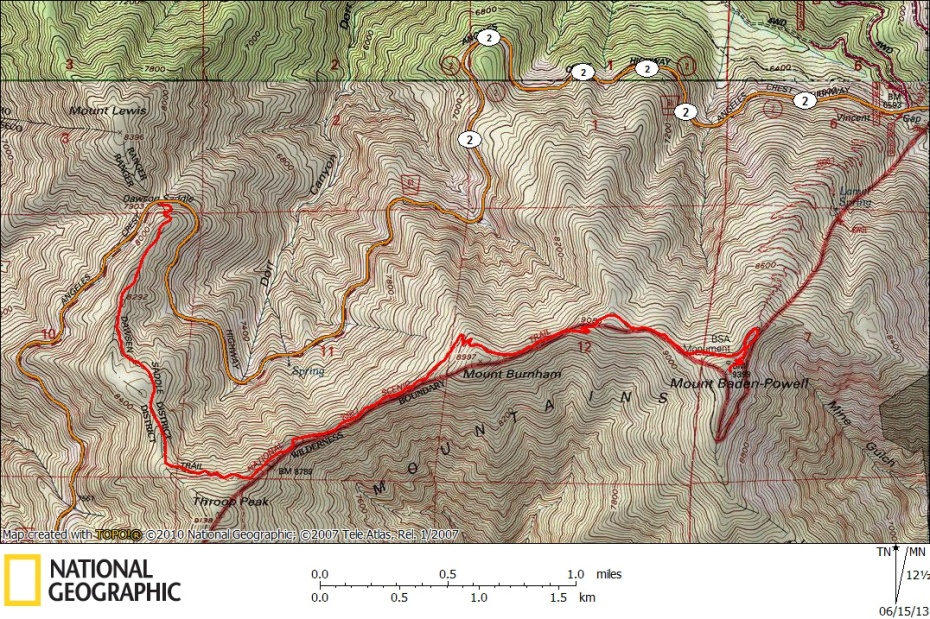 If you’re looking for an easy way to reach the high country of the San Gabriel mountains, you’ll be hard pressed to find a better access point than Dawson Saddle. Nestled high up on the Angeles Highway, the trailhead’s altitude of 7900 feet makes it the second highest in the range.

There are two trails that go up towards the PCT, but they both end up converging shortly up the hill. We have opted for the entrance on the left each time we’ve hiked the route. There is no sign posted to mark the trail, but it is easy to see as the highway rounds the bend on the saddle. 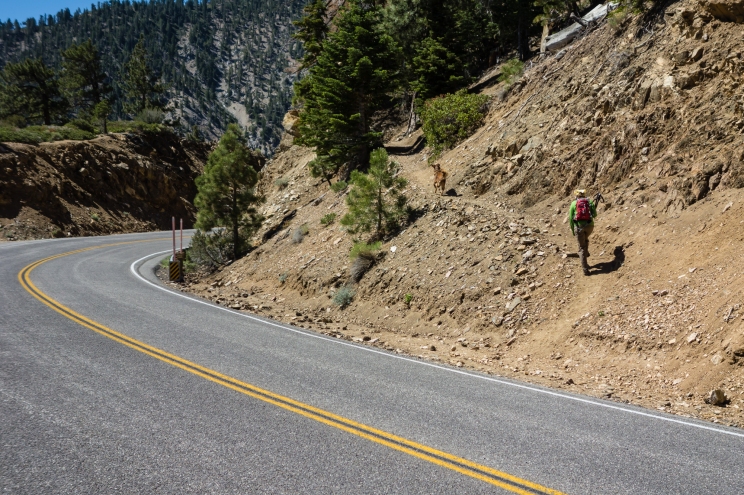 From here, the trail travels 1.8 miles up a thousand feet of elevation to the PCT, travelling through a pristine forest nearly the entire way. While this section is lacking in views, it is a very peaceful stretch of trail. 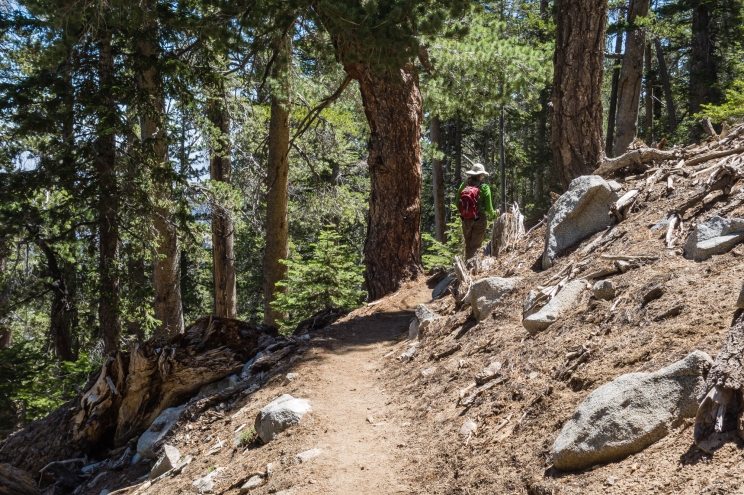 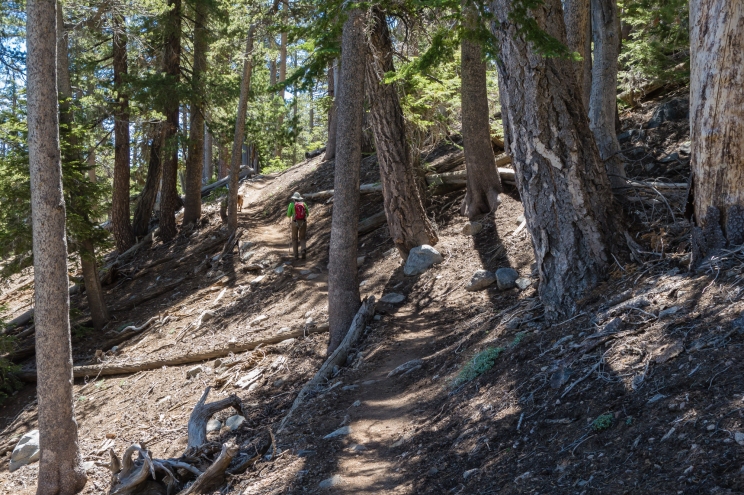 The Dawson Saddle trail was originally constructed in 1982 to commemorate the 75th anniversary of the Boy Scouts. Over 3500 hours were put into the construction of the trail, and it shows. Most of the trail engineering is done with dead trees and stones from the landscape, so the trail is well graded and maintained without being overwrought with obvious construction. 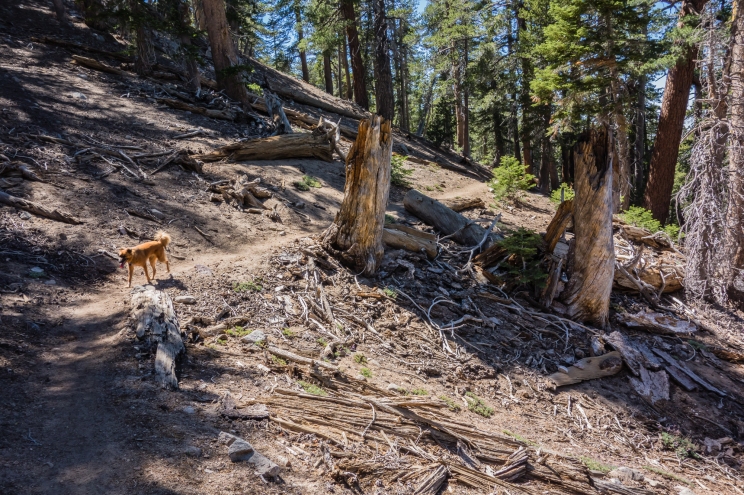 Most people hike this trail in the summer, which makes sense as the altitude makes it a nice escape from the heat down in the city. The trail is typically inaccessible in the winter, but there are rare opportunities at the end of fall or spring where you can hike the trail while there are patches of snow. Obviously, we try to take advantage of those brief windows when we can. The Dawson Saddle section of trail is especially great for this since it gets little to no direct sunlight which allows the snow to linger for much longer. 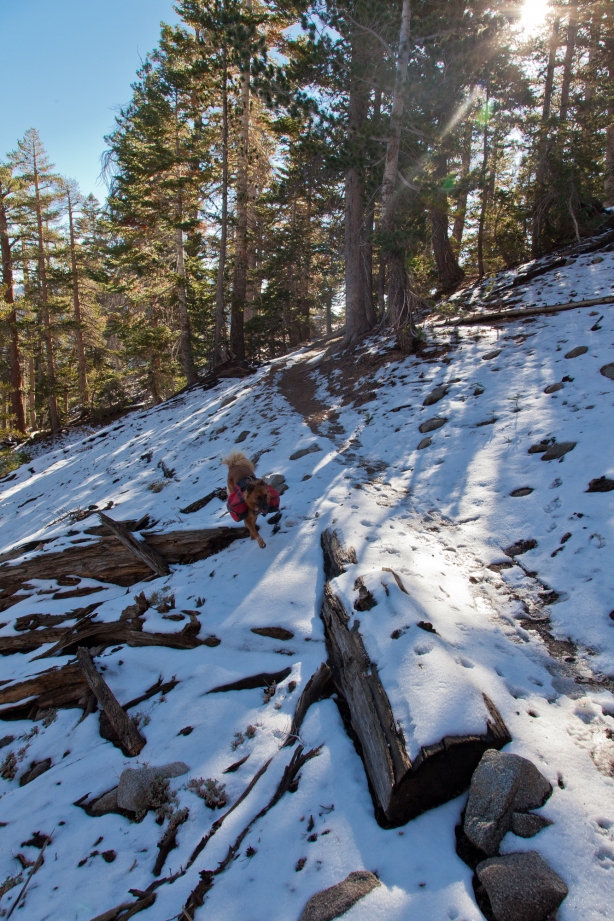 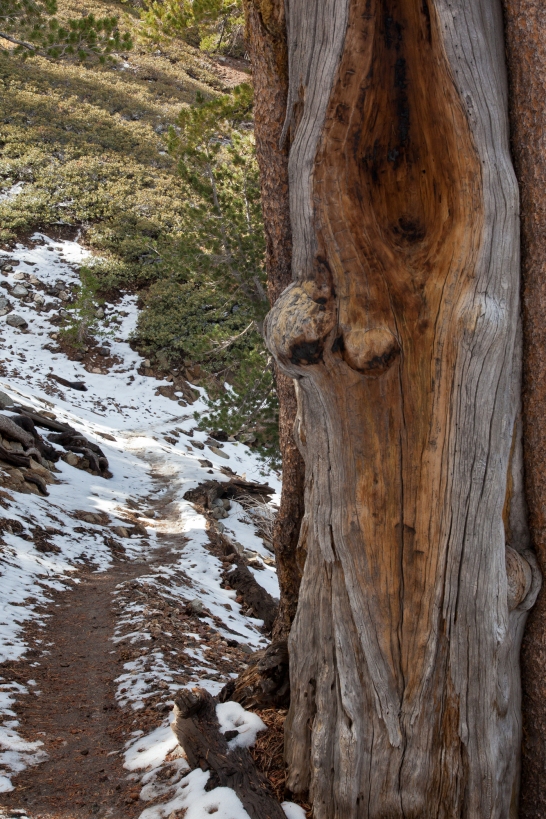 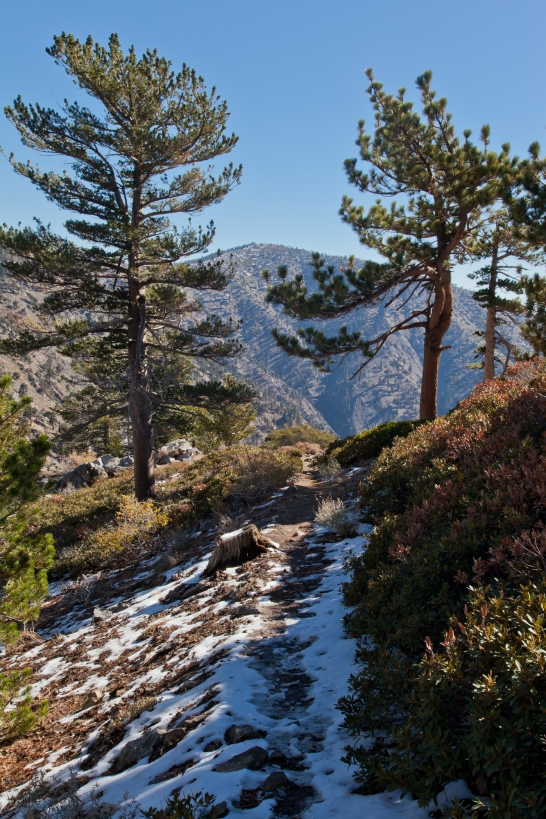 Once the route reaches the Pacific Crest Trail, the scene opens up dramatically. This section of the PCT goes along the backbone of the ridge, which allows expansive views in both directions. On one side, the Mojave desert stretches into oblivion, and on the opposite side, the sprawl of Los Angeles dominates the plateau below. Often, a layer of haze or clouds permeates over the metropolis which can make the location feel more remote.

It’s a strange feeling to stand up on the ridge in such a desolate place while staring at one of the biggest cities in the world. While the view is an unfortunate reminder that you are not exactly in the wilderness, there is a strange disconnect between the urban sprawl 30 miles away and your immediate surroundings. Things feel isolated up here. 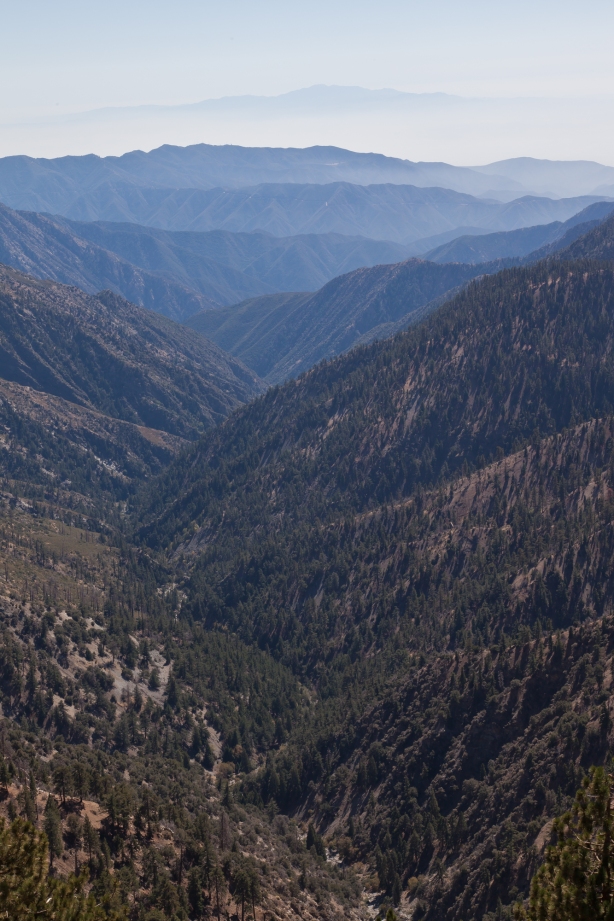 From the junction, Throop Peak is an easy detour if you are feeling ambitious. Either way, you’ll want to eventually head east on the PCT along the ridge towards Mount Burnham and Baden-Powell. The trail at this point dips down a couple hundred feet to a saddle between Throop and Burnham, adding a bit of redundant elevation gain to the hike, but for the most part is smooth sailing along the crest. 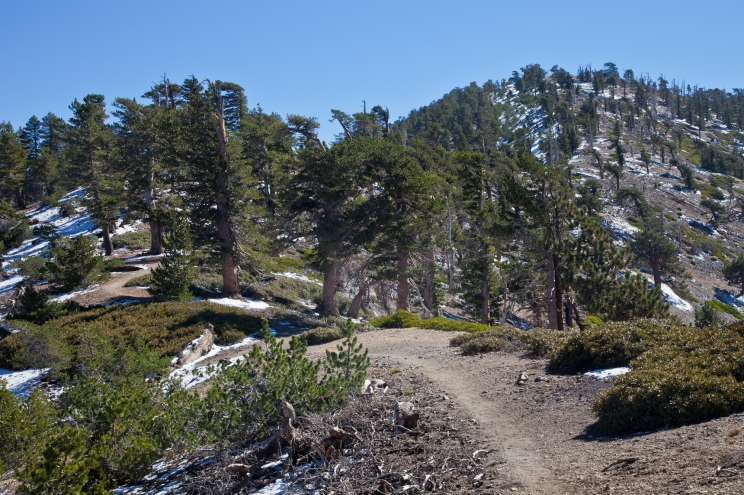 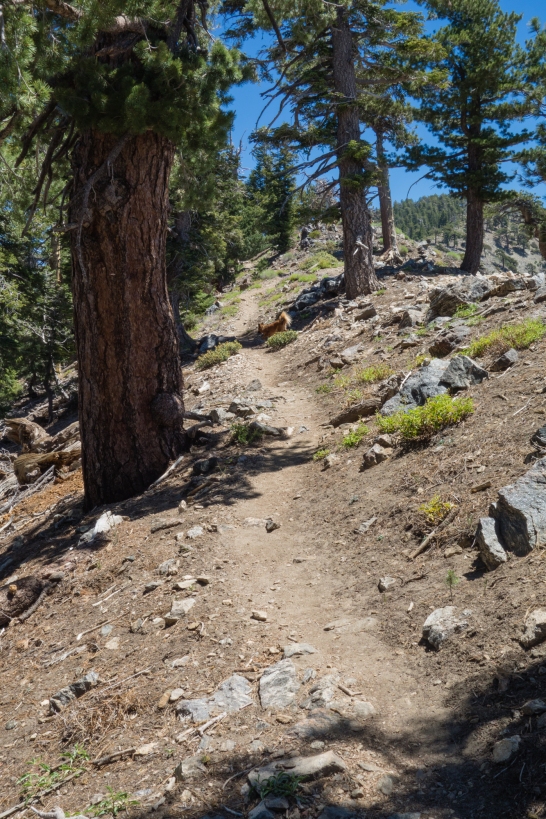 Eventually the trail deviates from the crest to circumnavigate Burnham on the northern side of the slope. The trail here is wooded and fairly flat, much like the Dawson Saddle stretch earlier. Like Throop, there is a side trail that allows for an easy detour to the summit of Burnham. The summits elevation is actually 8,997 feet, but it rounds up to 9,000 which is good enough for me.

Once you move past Burnham, the route initially crosses over to the southern slide of the slope and switchbacks up a bit. The trail here is more exposed and rocky, but the views are outstanding. 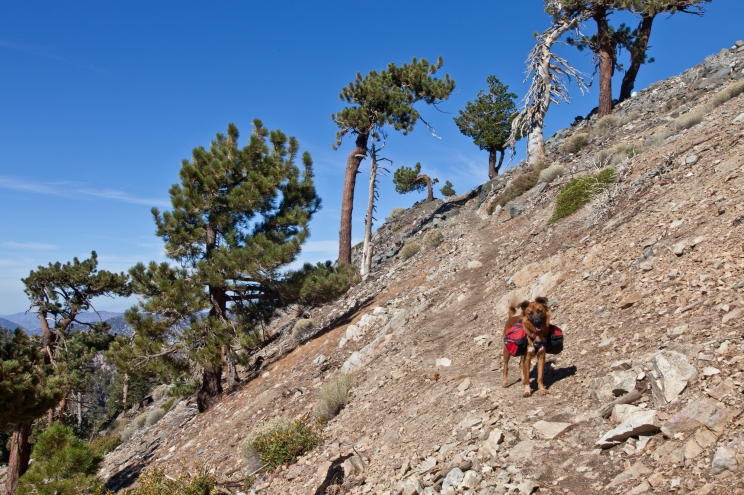 Once you return to the northern side of the crest, Baden Powell is visible through the forest and the summit is within striking distance. 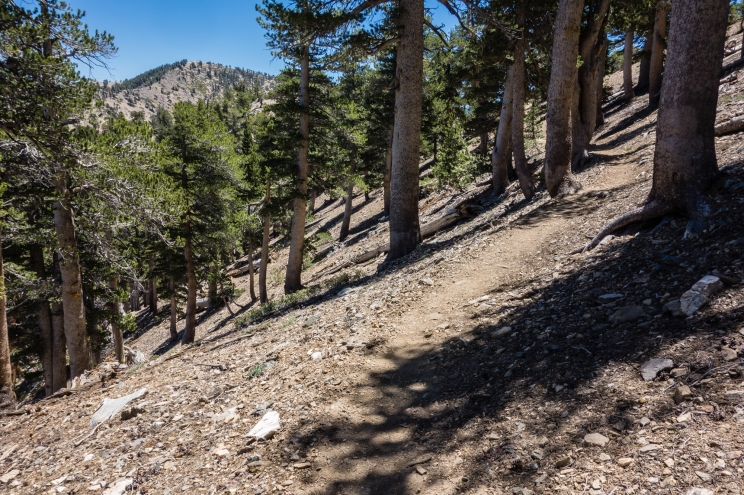 A little further up the PCT, the trail to the summit of Baden-Powell forks off. At this point, there will likely be more hikers on the trail since the Vincent Gap route appears to be the most popular approach to climb Baden-Powell.

The final stretch of trail to the summit is a series of switchbacks on a barren hill overlooking the Mojave desert. It’s a fairly steep stretch, and at an elevation over 9,000 feet after 4 miles of hiking, your legs will probably be burning. 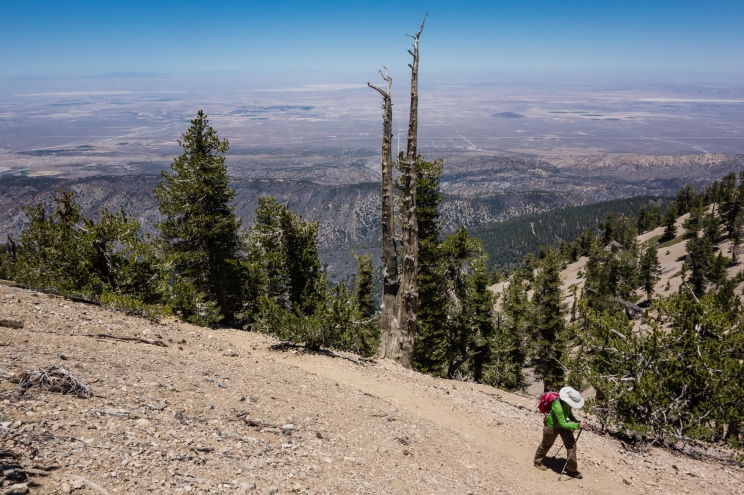 The summit payoff is always worth it though. At the top, you get to rest your feet and pat yourself on the back for climbing the 5th highest peak in the range, and the views are pretty nice as well. The best views from Baden-Powell are towards the east where Mount Baldy and the eastern fork on the San Gabriel river reveal themselves in a sweeping vista. 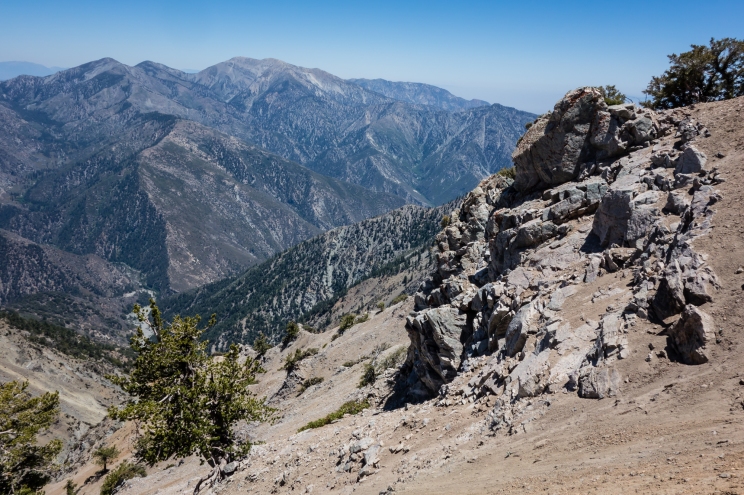 The rest of the hike is just retracing your steps back down the mountain, unless you happened to set up a car shuttle at Vincent Gap (if you have 2 cars at the trailhead, this is a no-brainer.)

It’s always nice to see the trail from the opposite perspective though, and one landmark that stands out much more when hiking towards the west is the Devil’s Punchbowl. The geologic oddity is clearly visible at the base of the mountain range for much of the hike back down. 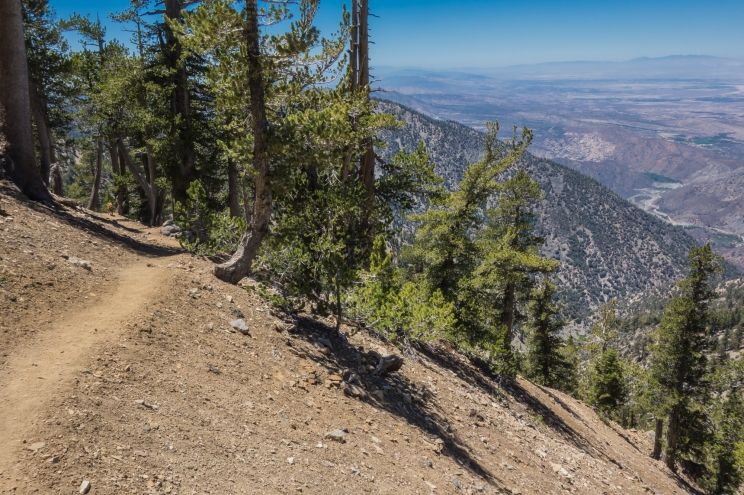 What else is there to say? It’s a scenic hike in a place that actually feels like wilderness, all within the greater Los Angeles area. You should check it out sometime. 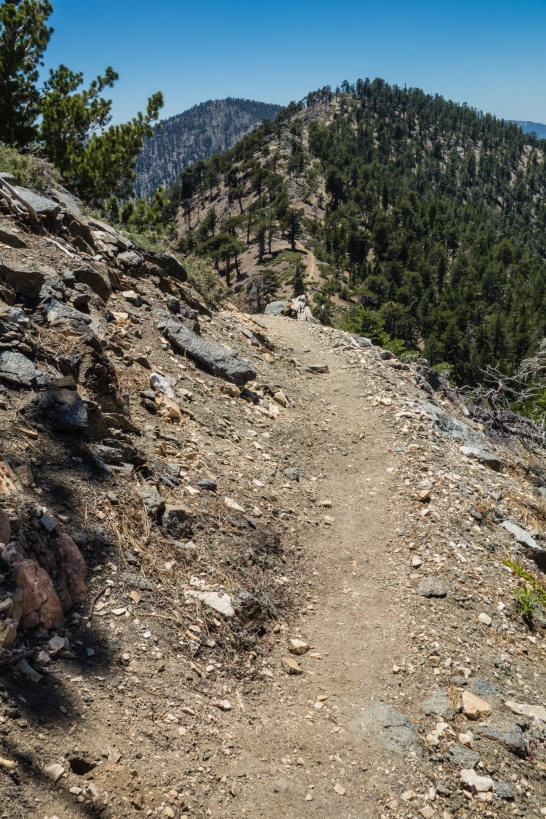 One thought on “Dawson Saddle to Mount Baden-Powell”