We returned to one of our favorite romping grounds to tackle one of Southern California’s classic day hikes. The Baldy Bowl to Devi’s Backbone loop provides easy access to LA’s highest peak while offering incredible views and some intimidating exposure along the way.

It’s been a pretty pathetic winter here so far here in Southern California. Callie and I have been waiting for some snowfall before venturing to some of the San Gabriel’s highest peaks, hoping to time our visits when the mountains’ beauty are enhanced by the scattering of snow. Our outdoor excursions have been limited to local mountain biking rides in the Altadena foothills, which by the way, is an excellent form of training for your dog if they are up to it. So, while I have been slowly softening up during the winter months, at least Callie has at least been staying in top form. Those rides only last a couple of hours though, and both of us have been getting antsy for something bigger to chew off.

Heading into this past weekend, we’d had enough. It was time to throw our packs on and go for an adventure. I set my sights on the Devil’s Backbone trail, which is one of my favorites in the area. The trail truly lives up to its name due to a short harrowing stretch that travels right along the narrow backbone of a ridge, with steep exposure on both sides. This route is generally off limits in the winter due to the high level of exposure, but with the record breaking dry winter that we have had so far, snow was not a concern at all.

The most popular way to tackle the Devil’s Backbone is to ride the Mount Baldy chairlift up to Baldy Notch, and then hike to the summit from there. This gets the elevation gain of the hike down to a much more moderate 2300 feet. However, if you are hiking with your dog, then the chairlift is a much less appealing option (though still technically allowed). In that case, it makes much more sense to loop the Devil’s Backbone Trail with the Baldy Bowl/Ski Hut trail, since both trails start at the Manker Flats trailhead.

We opted to ascend the Ski Hut trail and then descend down the Backbone trail, mainly so that we could enjoy a beer and some food on our descent, but both directions have their pros and cons. The route starts up a fire road that passes San Gabriel Falls after about a quarter of a mile. This can be one of the more impressive waterfall displays in the San Gabriels, but right now it is a faint trickle that acts a solemn reminder of how dry things are.

Shortly after passing the falls, the Ski Hut trail cuts up the hill on the left side of the road. Surprisingly, there is no sign indicating the trail despite it being very popular and well traveled, so if you have not hiked it before, it can be pretty easy to miss. Just keep a close eye on the ridge to the left side of the fire road. 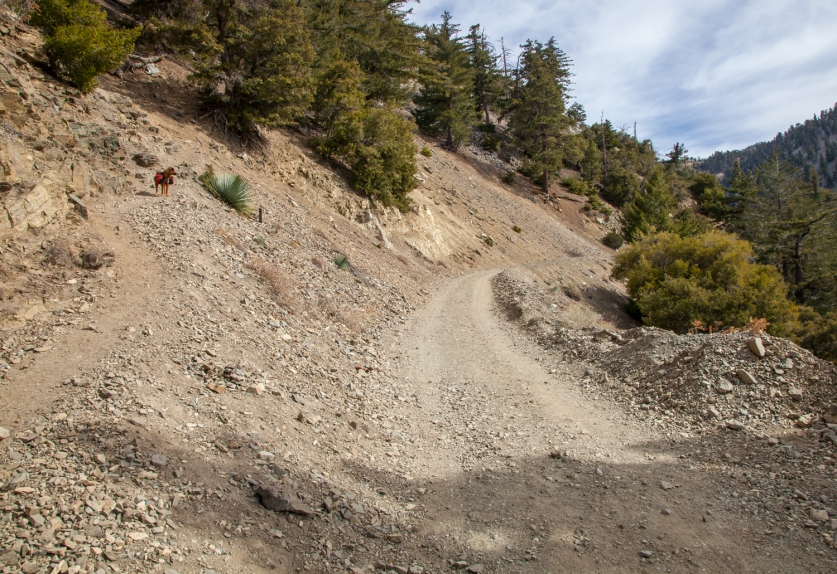 Once you begin ascending the Ski Hut trail, the route up the mountain reveals itself. The teal colored Ski Hut is visible as a tiny dot on the landscape with the Baldy Bowl towering in the background.

Facing the other direction, views down the Baldy Canyon towards Los Angeles begin to open up as well.

These views remain consistent over the next mile and a half as the trail ascends to the Ski Hut. The summit area is so large and distant, that as you approach, its appearance remains unchanged. It becomes quite difficult to feel any sense of progression as you move up the slope, but thankfully the mountain ridgelines and forested slopes provide a beautiful landscape to spend some time in and ignore any rush to reach your destination.

The alpine zone here feels reminiscent of the Southern Sierra, which is about as good of a compliment as I can think of.

After about two and a half miles, the trail finally reaches the Ski Hut. This hut is owned and operated by the Sierra Club. So, depending on your visit, it might be locked up upon your arrival, which was the case for us this time. It gets more use during snowy winters when people use it as a shelter for overnight ski or mountaineering trips. Even if it is closed, the area has a number of picnic tables and benches to lounge, eat a snack, and enjoy the view. There is also a creek that flows nearby to the hut to provide the trail’s only reliable source of water. Many people end their hike here, but if you are going all the way to the summit, then the hardest half of the ascent is about to come.

From the ski hut, the trail crosses the bottom of the Baldy Bowl towards the ridge to the west, though I’m not sure the word trail really qualifies here. It traverses across a boulder field and while it’s pretty easy to follow, it is more of a suggested route than an engineered trail. 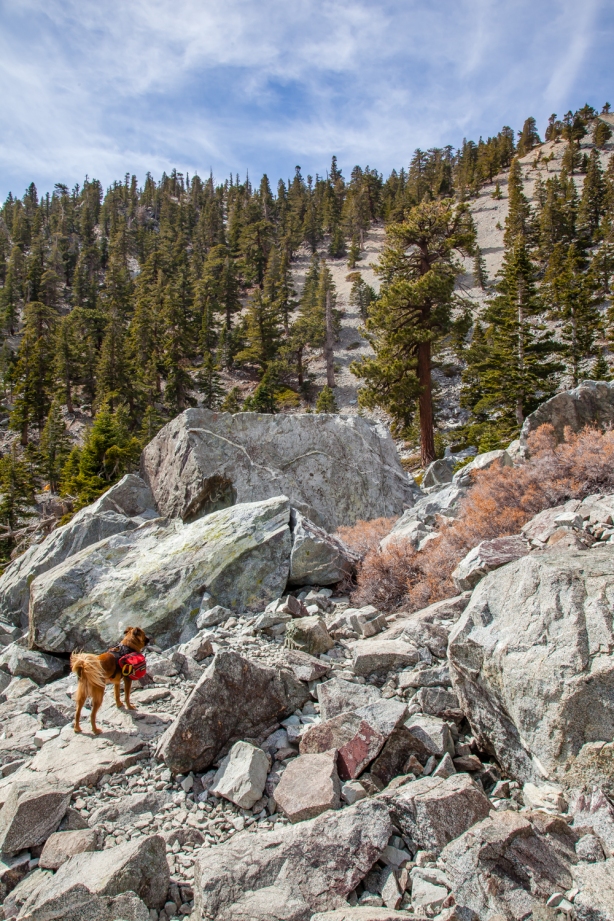 Once the trail begins the ascent up towards the western ridge, the hike takes on another level of difficulty. The grade of the slope is about as steep as any trail, and by now you are over 8,000 feet high and the altitude becomes increasingly noticeable. Chances are that, like me,  you will have woken up near sea level on the morning of the hike, so the sudden change in elevation is a bit of a jolt to the system. Combine that with an unrelenting slope and you have the perfect recipe for an ass kicking.

Upon reaching the ridge, the trail mercifully flattens out for a short stretch to give you a chance to catch your breath and potentially fool yourself into believing that the hard part is over with. 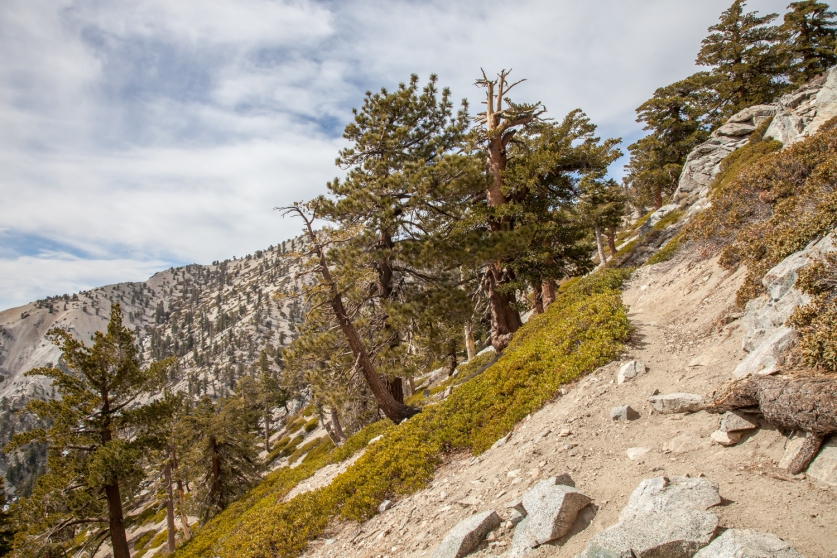 Nope! The trail more or less sticks directly to the ridge line, and thus, does not waste much time with many switchbacks. 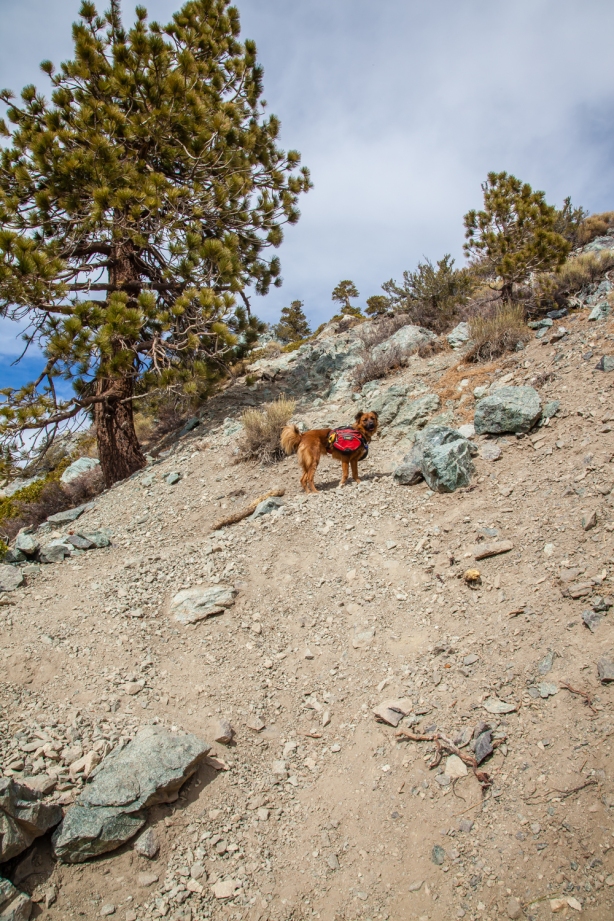 Fortunately, the payoff for hiking up a steep ridge line is that it will usually give you some pretty spectacular views, and this is no exception.

The ridge peters out right before the final approach to the summit, and the last stretch is thankfully one of the flattest parts of the entire hike.

Upon reaching the summit, we caught our breath and then convened at the summit marker for a celebratory hi-five. This was Callie’s third time up the Baldy Bowl and her fifth Baldy summit, not bad for a little pup!

Leaving the summit, we began our descent of the Devil’s Backbone trail, which unlike the Ski Hut trail, was new territory for Callie. For the first hundred yards, she kept stopping behind me with a concerned look. She was convinced that I was going the wrong way, and I found her uneasy expression to be quite adorable and hilarious. I just kept on descending, and eventually her anxiety disappeared and she was leading the way again.

The trail starts out by dropping to a saddle between Mount Baldy and Mount Harwood. If you are feeling ambitious, it’s easy to ascend Harwood to add another peak to your hike, but in our case we chose to stick to the trail.

The route circles around the southern side of Harwood, and thanks to the barren alpine landscape, the view to the south opens up to an unbelievable vista that on a nice day can extend all the way to the Channel Islands. The trail miraculously manages to stay almost completely flat during this stretch as well. All of this combines to make this is one of the nicest sections of trail that you’ll find in SoCal.

Once the trail passes Mount Harwood, it begins to straddle its eastern ridge line on its descent to Baldy Notch, and the idyllic nature of the hike quickly changes as steep exposure surrounds the trail on both sides.

This epic stretch culminates with a short section where the trail cuts across a steep, loose slope and then crosses a narrow knife ridge that is sure to get your heart going a bit.

Most hikers approach this section with extreme caution, to the point where a queue can form. Meanwhile, Callie wondered what all the fuss was about. 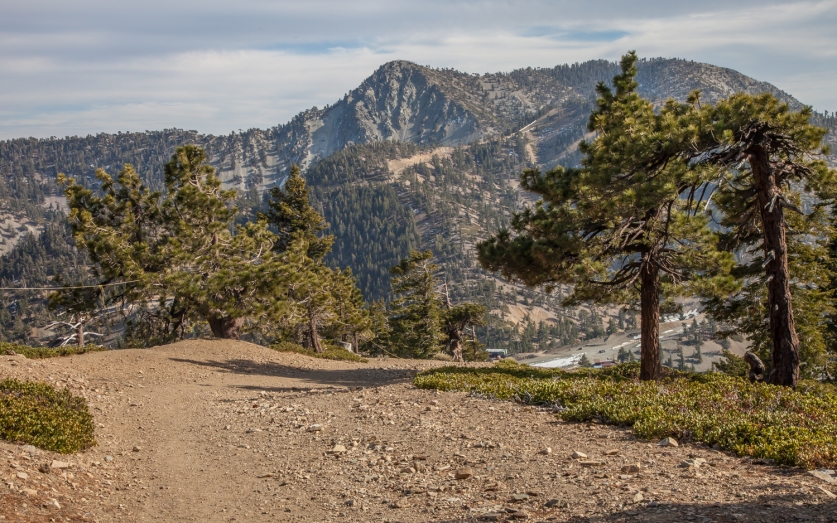 If you are hiking without a dog and have some money to spare, then this could be the end of your hike. Mount Baldy operates its chairlifts on the weekends year round, and it costs 25 dollars for a round trip, 15 dollars for a one way uphill trip, and 12 dollars for a one way downhill trip. If you are more ambitious than I am, you can technically take your dog on the chairlift with you. I personally am not comfortable with that idea at all, I get nervous even thinking about it, but the resort does allow it.

The restaurant at the Notch serves up your typical food for a Ski Lodge. Fortunately, a long hike in the mountains elevates it temporarily to 4 star quality, at least in the mind’s eye. Sitting on the deck with a cold beer and a burger, soaking in the afternoon sun, surrounded by nothing but peaks and clouds, it can be pretty hard to believe that you are still in Los Angeles.

As a consolation, the view from the fire road down into the canyon opens up as you hike down, which provides a nice window to see the sunset light beaming into the canyon as you finish the hike.