With the suburban sprawl of the Inland Empire surrounding its west side and plush resorts in Palm Springs flanking the east, San Jacinto State Park provides a convenient refuge for Los Angeles hikers looking for an escape from the grid. Most visitors access the park via a tram that ascends from Palm Springs for close to a mile of elevation gain to an altitude of 8516 feet. On the opposite side of the mountain, a number of trails offer more ambitious and desolate routes to the summit. The Marion Mountain trail is probably the most popular of those routes, and with good reason. It’s a phenomenal hike that at times feels more like the Sierra than a local LA trail. 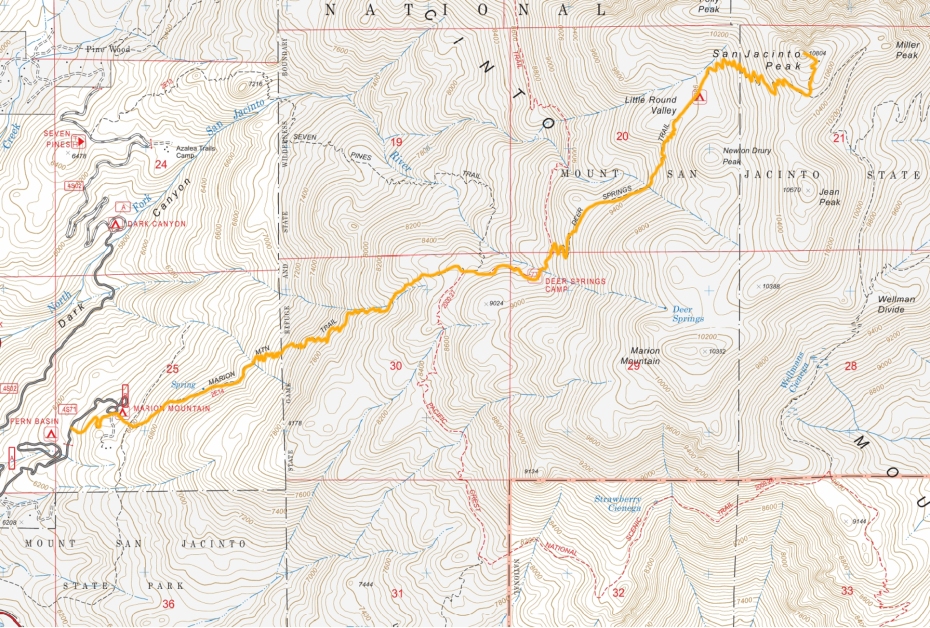 This is a pretty steep trail, and the first section of it is among the most challenging. Warming up after a long drive is always a little rough, and when you combine that with an opening stretch that climbs about 2000 feet over two and a half miles you have a recipe for some discomfort. The good news is that the trail starts off in a splendid forest of pine and cedar trees, and the rapid ascent quickly yields some beautiful views to the west.

On this visit, a sea of clouds blanketed Los Angeles and transformed the mountain range into its own island in the sky. Across the valley, Mount Baldy was visible through the haze as a neighboring island. This type of view is not uncommon in LA’s mountain ranges, but it consistently brings solace no matter how many times I’ve seen it.

Open views like that are relatively few and far between though on this trail. The forest here is vibrant and thick, which is a nice change of pace in SoCal but not very conducive to sweeping panoramas. 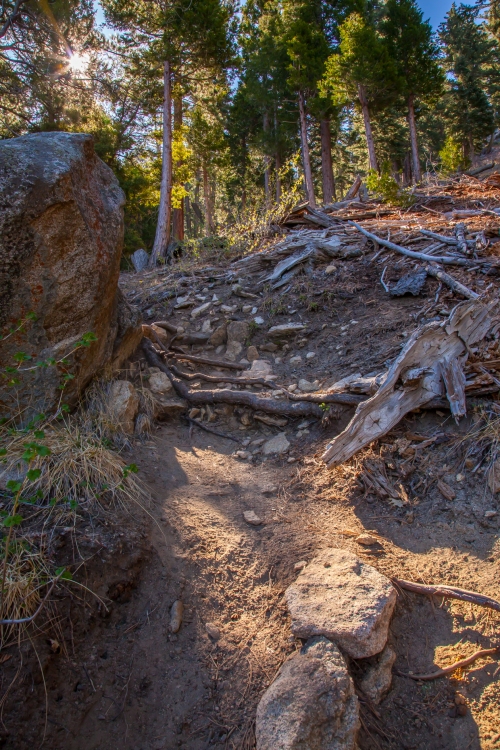 When those views do pop up they can be amazingly expansive, and each one acts as a great reward for your effort up the steep slope.

After about 3 miles, the trail reaches a junction with the PCT. This is roughly the halfway point for the hike.

From the junction, the route up the mountain follows the PCT for close to a mile up the hill. Here the trail begins to traverse onto the northern slope of the mountain. Some pockets of snow began to show up around the trail, but nothing of any concern. This section can hold a significant amount of snow through the spring in a wet year, but the 2013-2014 winter was anything but that.

Open views on this stretch of the PCT are nonexistent, so you take what you can get. 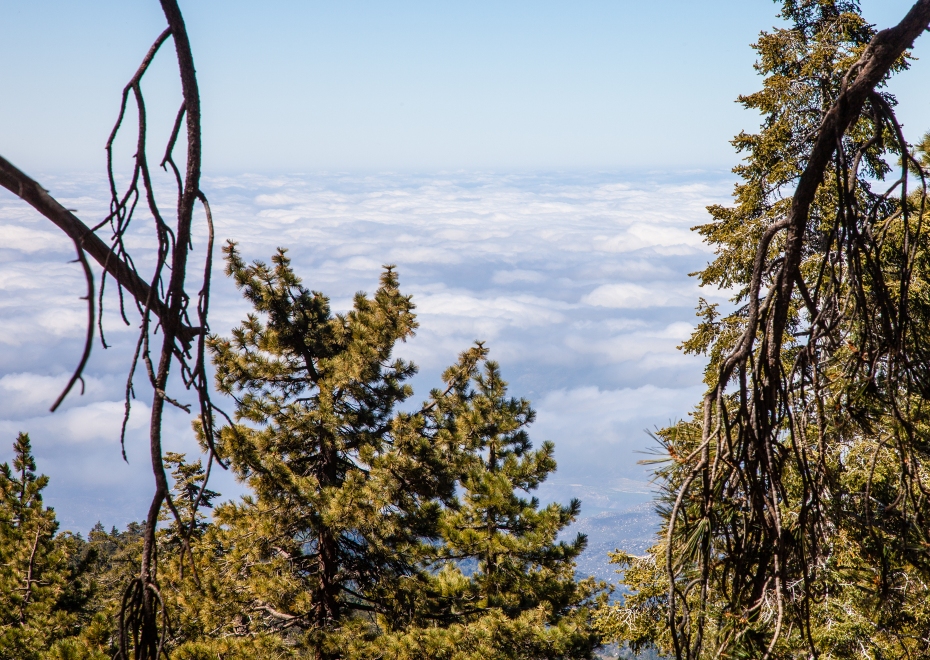 I counted two solid water sources on my hike up the mountain, though I wasn’t paying that much attention since I had opted to carry what I needed. There was fresh clean water flowing out of the snow at Deer Springs Creek on the PCT, which I expect will dry up very soon. 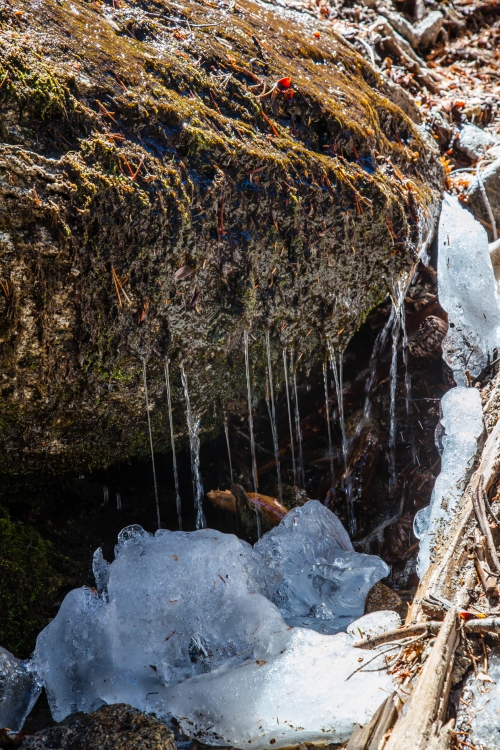 At the next junction, the PCT heads down Fuller Ridge and the route up Marion hangs a right up the hill on the Deer Springs Trail. The forest suddenly vanishes here, replaced by hillside of short shrubs that help open up some of the best views of the hike. 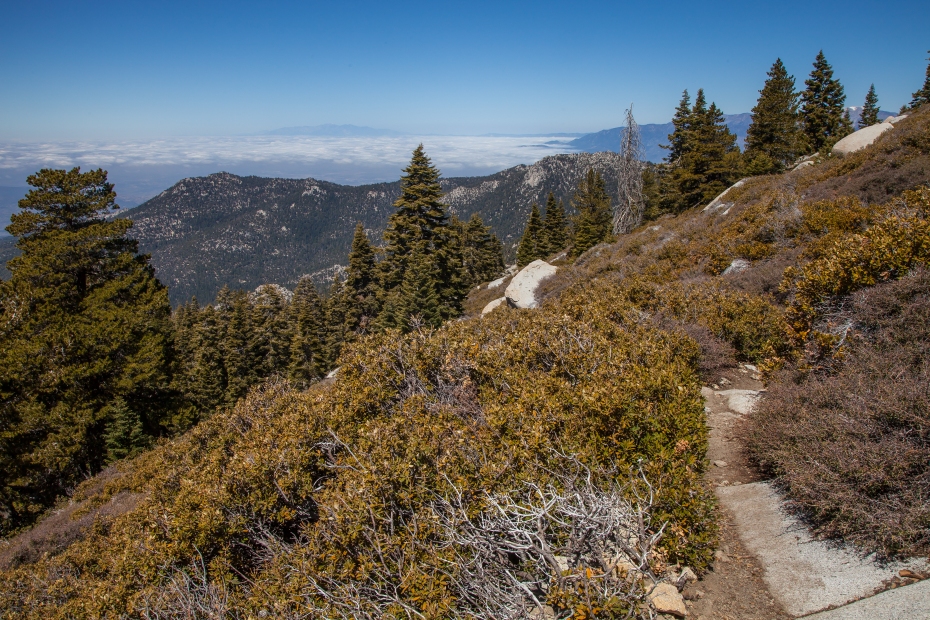 As the trail ascends the hill, the San Gorgonio Wilderness begins to become visible over the ridge to the north in a spectacular view.

The main downside to this section is that the shrubs flanking the trail are quite sharp and at times encroach onto the trail enough to easily scrape up your legs. Pants are nice to have during this stretch. 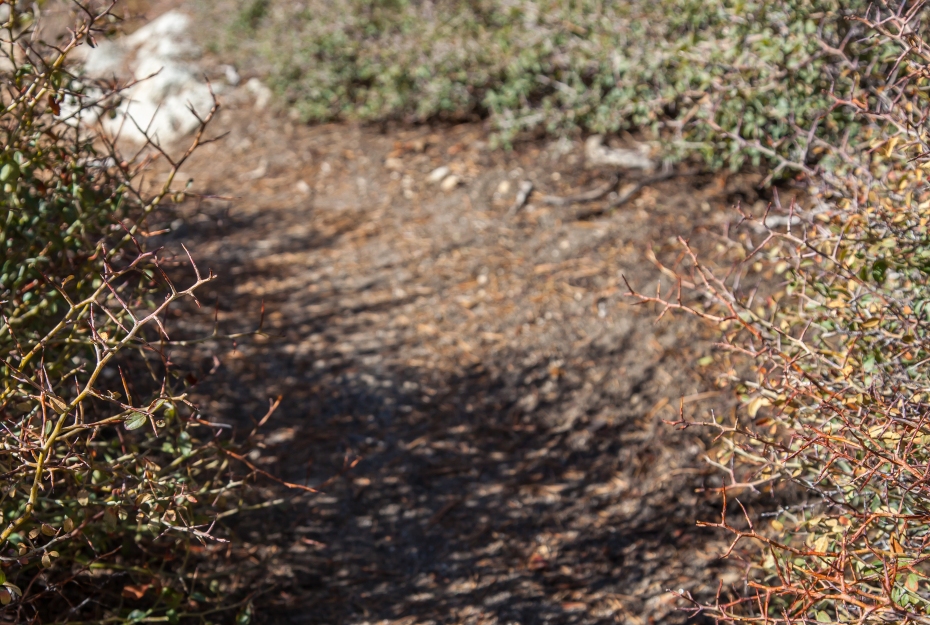 Soon enough the trail returns to the trees and trades the open landscape views with intimate forest scenes. 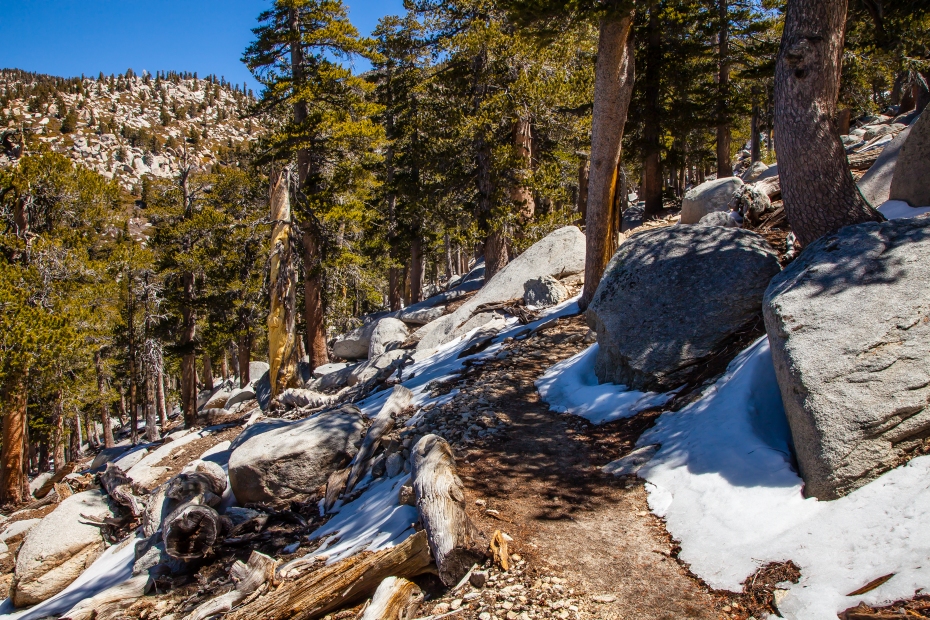 As the trail approaches Little Round Valley, it begins to flatten out and the views of the surrounding area begin to become more obscured by the nearby landscape. 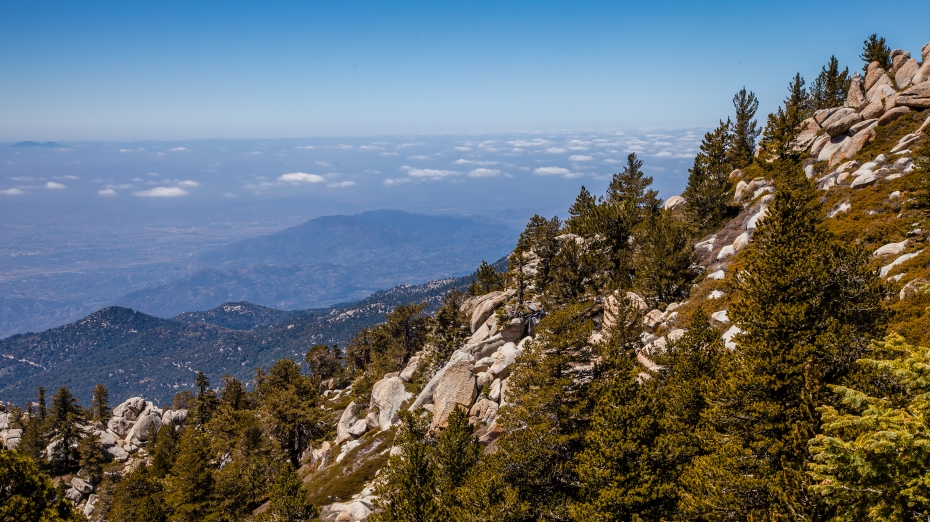 Little Round Valley is a strange place. It is almost completely flat for about a quarter of a mile in each direction, which is extremely odd in such a rugged environment. The location has apparently been deemed a fantastic place for camping by the State Park as evidenced by the unneeded development of the whole area. Each campsite has its own sign and surprisingly well developed path branching through the trees. To top it off, there is a porta potty sitting right there in the middle of the forest clearly visible from the trail. So much for a backcountry wilderness experience. It’s puzzling that the park service makes choices like this and yet dogs are not allowed on the trail, but I digress…

Fortunately, the trail quickly begins ascending out of Little Round Valley up the final hill to the summit area. Marion Mountain begins to come into clear view from the southern side of the trail. Despite the first part of this route being called the Marion Mountain trail, there is no official established trail to that summit.

As the trail plateaus for the last time, it intersects with the rest of the other paths that reach the summit of San Jacinto, and chances are that any sense of solitude that you previously had will be gone. This is a pretty popular summit.

The final stretch is a short scramble over a few boulders. There is no “right” way to take here, but some routes will be a bit more difficult than others.

The view from San Jacinto is pretty spectacular, you can see in all directions for miles, and the view out to the desert seems to stretch for an eternity. It’s a little difficult to photograph though, mainly due to the throngs of hikers who sit on top of or in front of any possible foreground element that you could include in your shot.

I prefer to enjoy my views and breaks with some solitude in places like this, so I usually don’t linger on summits like this. Before long, I was heading back down the mountain enjoying amazing views from the trail that I had all to myself. 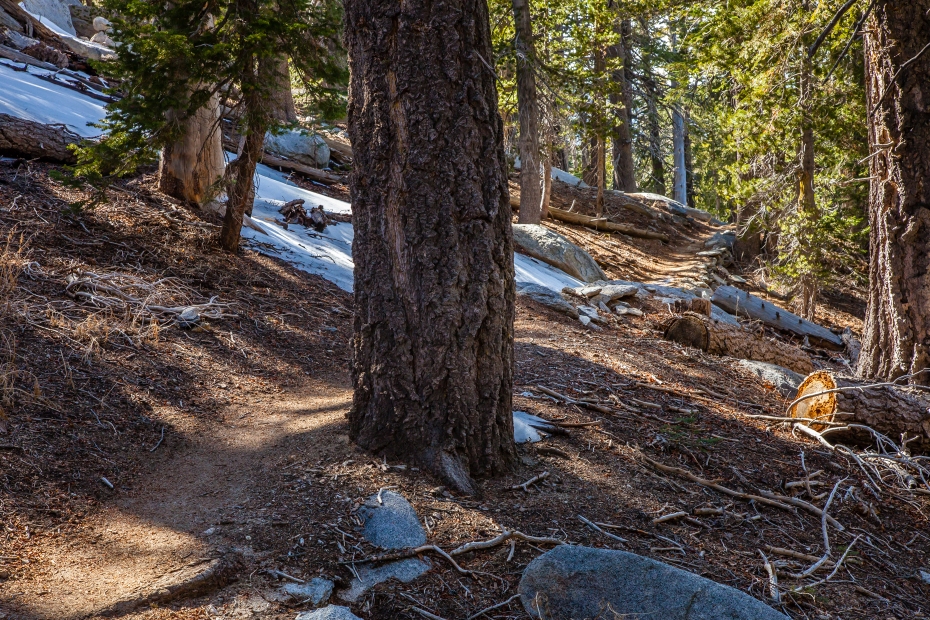 The afternoon sun trickling in through the trees made each twist and turn feel like a new revelation. The scattered patterns of light on the rich textures of the forest floor gave each scene a remarkable depth. 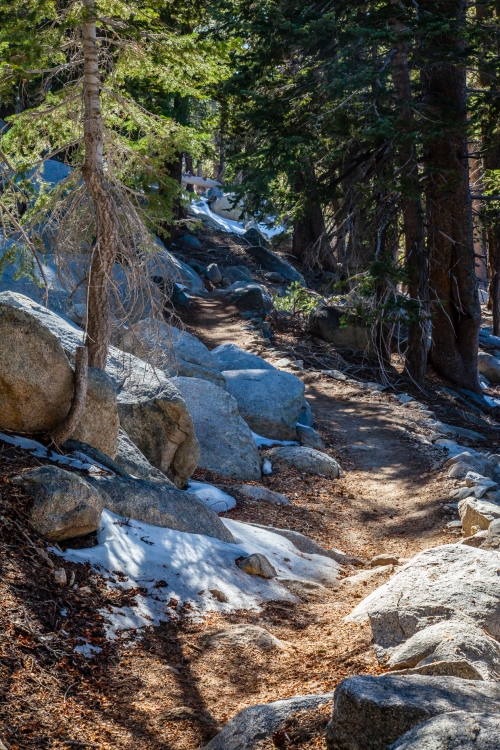 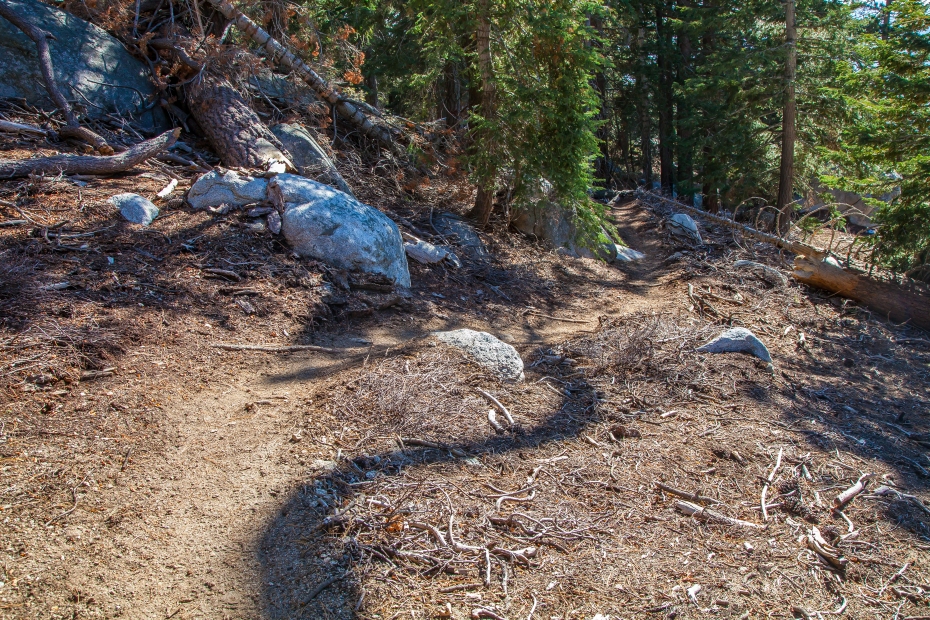 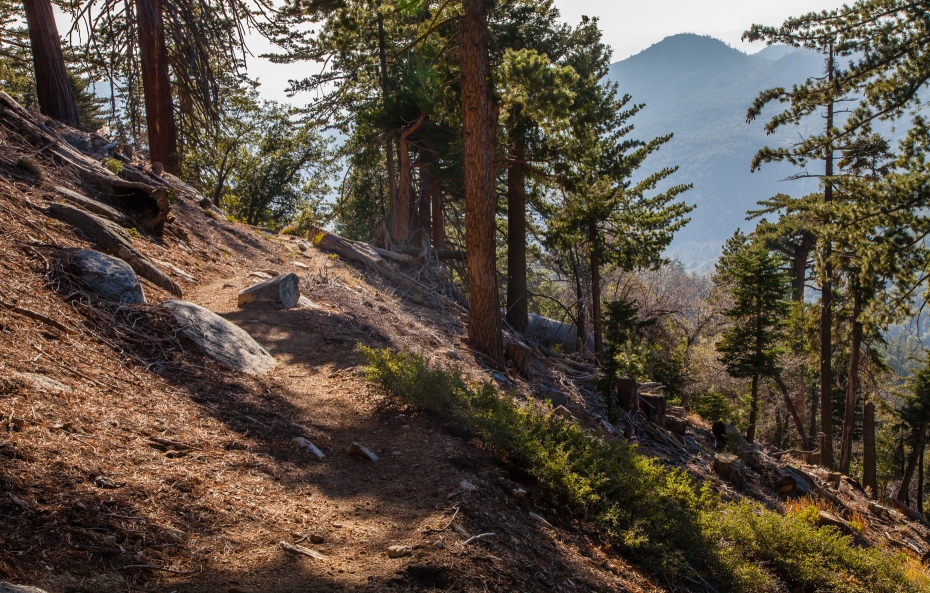 As far as LA hikes go, this is as good as it gets.

14 thoughts on “Mount San Jacinto via the Marion Mountain Trail”