Posted on February 1, 2015 by calitrails

A little off-trail can go a long way, and the Baboon Lakes are a perfect example of that. Only a few hours drive from LA, this area remains an oasis for people looking to escape the beaten path while keeping their day job. 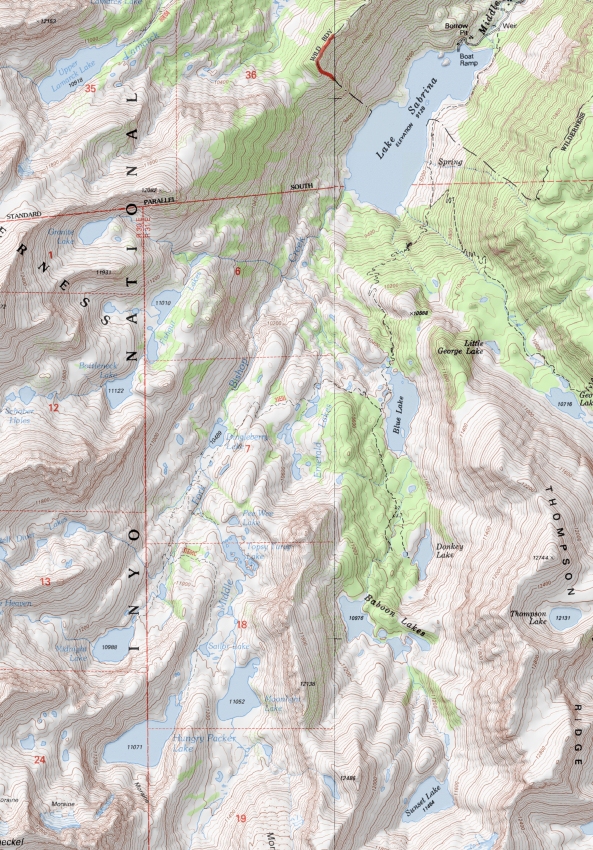 Seeking a slice of solitude on a summer weekend, we ventured up to Lake Sabrina on a Saturday morning for a quick getaway from LA. This can be a pretty popular trail by wilderness standards, but juxtaposed against where we had been five hours earlier, the trail felt our own private spot in paradise. 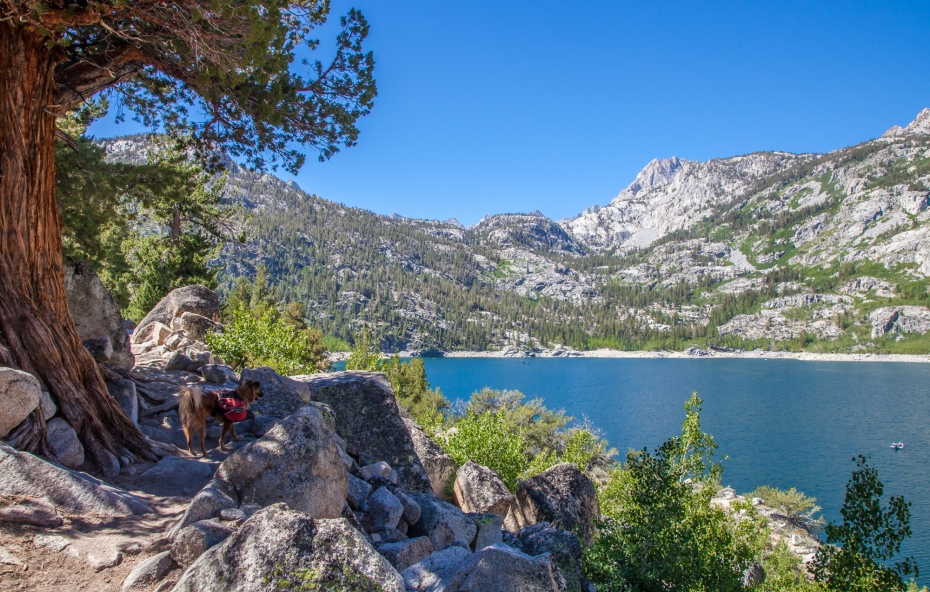 Upon reaching the opposite side of the lake, the trail begins its ascent towards Blue Lake. The ascent remains steady, so we quickly gained elevation as we treaded up the trail.

It doesn’t take long before you feel like you are in high country out here, and the views are typically jaw dropping. Just another day in the Eastern Sierra.

The trail’s first big landmark is Blue Lake, a fine Sierra lake thats only real downside is how easy it is for everyone else to get to. Alas, we didn’t have the enormous, scenic lake all to ourselves. Not that it mattered much, we quickly found a little nook to call our own, and enjoyed a small snack on the lakeshore while soaking it in. 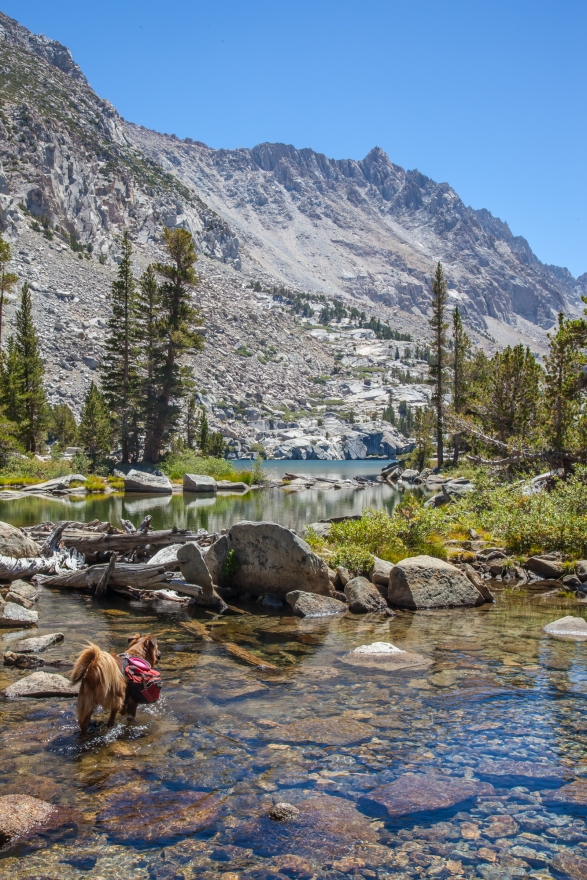 For most hikers, Blue Lake is as far up the trail as they venture, but for those looking to continue to explore the region, there are two trails that fork off from Blue Lake into two separate basins. The more popular basin of the two seems to be one to the west of Blue Lake, containing Dingleberry, Moonlight, Midnight, and Sailor Lakes. Callie and I had a fabulous trip in that area a couple of years ago, so we were looking forward to exploring some new territory via the basin south of Blue Lake. We continued along the trail towards Baboon Lakes and then took a left turn to check out the trail to Donkey Lake. The trail follows a creek for the majority of the small stretch to the lake, which Callie saw as an opportunity to hone her skills at fishing. She is still terrible at it. 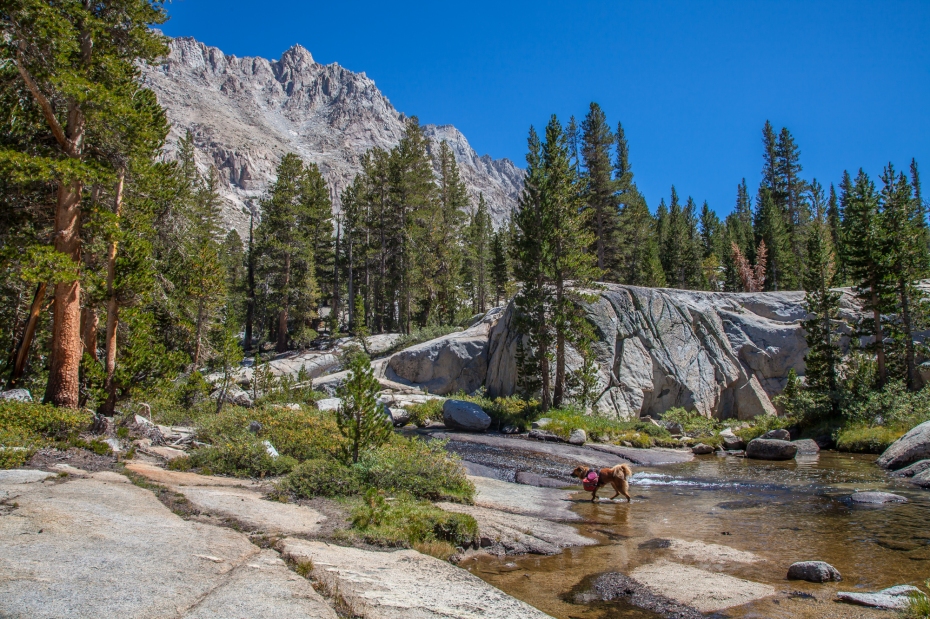 We arrived at Donkey and sprawled out on some cliffs hanging over the edge of the lake. There isn’t much accessible shoreline here, so we embraced what we had to work with. We could have stayed here and remained entirely content, but our initial goal for the day still beckoned to us further up the basin.

We threw our packs back on and returned back to the main trail, where we took a left and continued up the basin towards the Baboon Lakes. The trail quickly vanished into the thick forest growth, and we were suddenly forced to rely on our route finding to reach the mountain. We initially chose to stick close to a creek that the trail had been paralleling, which proved to be a mostly effective strategy for the first stretch.

The terrain becomes steeper as it approaches Baboon Lakes, so we had to leave the creek and begin to ascend the ridge via a series of granite ledges. The terrain here is fairly open, so there are a number of ways that one can successfully navigate through here. Either way you approach, you are bound to get some fantastic views looking back down the basin below towards Blue Lake.

At last, we reached the first Baboon Lake and were able to set up camp and take the loads off our backs. Since the final stretch that leads towards Baboon Lakes is off trail, we didn’t expect to find many crowds upon our arrival. Unfortunately, the luck of the draw did not favor us on this trip as there was already one other party that had set up camp on the desirable western side of the lake. We found ourselves a nice private site away from our neighbors, and then headed back over close to their camp to shoot some pictures of the late afternoon sun blasting the nearby peaks with golden light. 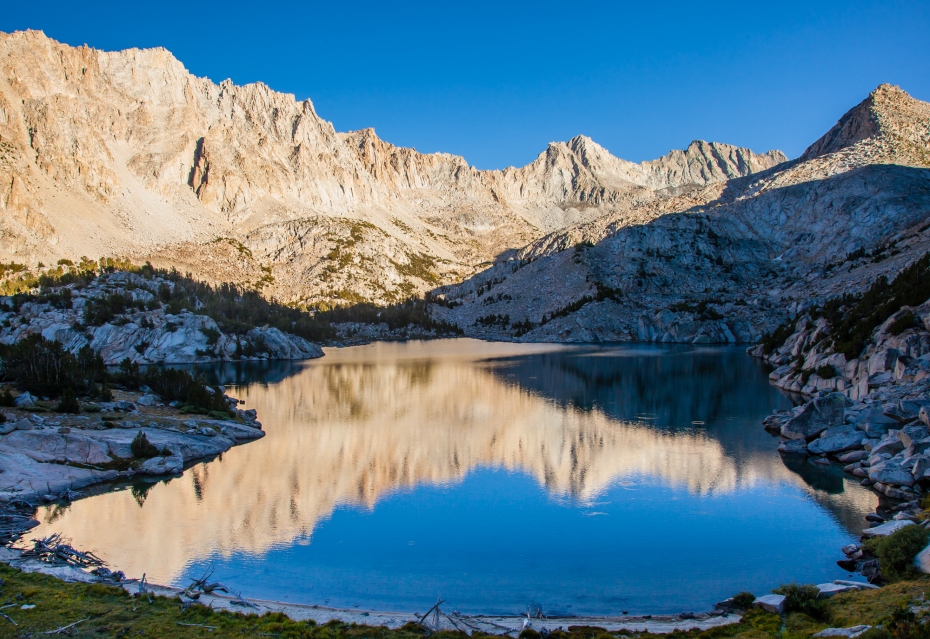 Near camp, we were treated with an incredible view of the lower basin with Owens Valley as a backdrop. As the day turned to night, the view continually changed in a stream of brilliant light, and we had no choice but to stare and contemplate life’s bigger meaning, or nothing at all. Sometimes the two can become the same thing.

The following morning we took a quick trip to Sunset Lake before breaking camp. First, we had to figure out how to cross the Baboon Lakes before we could begin the ascent. The morning air was still calm and as a result, the lakes still retained their mirror like surfaces into mid morning. This would have been more fortuitous if this area was known for its photographic opportunities. Alas, it is not, and the early morning light entered the basin well past the point of it having any golden color.

We knew that the photography here probably wouldn’t be spectacular, so we weren’t surprised by this. The goal of the trip was to just get a quick escape that made us feel like we were in the Sierra backcountry, and as we ascended up the creek towards Sunset Lake, there was no doubt that we had succeeded in our goal. The route finding here is easy, the terrain is forgiving, and the scenery is out of sight. This is the the type of off trail travel that will make you wonder why you ever feared leaving the trail in the first place.

Soon enough we were at our destination. Sunset Lake is a spectacular sight, and one that is surprisingly different from the Baboon Lakes. The Baboon Lakes are planted almost exactly at the tree line, so even though Sunset Lake is only a few hundred feet above, it is firmly above the tree line. The lake is also close to a few glaciers, so it takes on the milky turquoise color commonly associated with glacial lakes.

Despite the other worldly appearance of the lake, it is not very inviting for the long term. I didn’t notice any good spots to set up camp during our visit, and the majority of the shoreline is not easily accessible. So, it didn’t take long before we began heading back down towards our camp and the inevitable end to our trip. 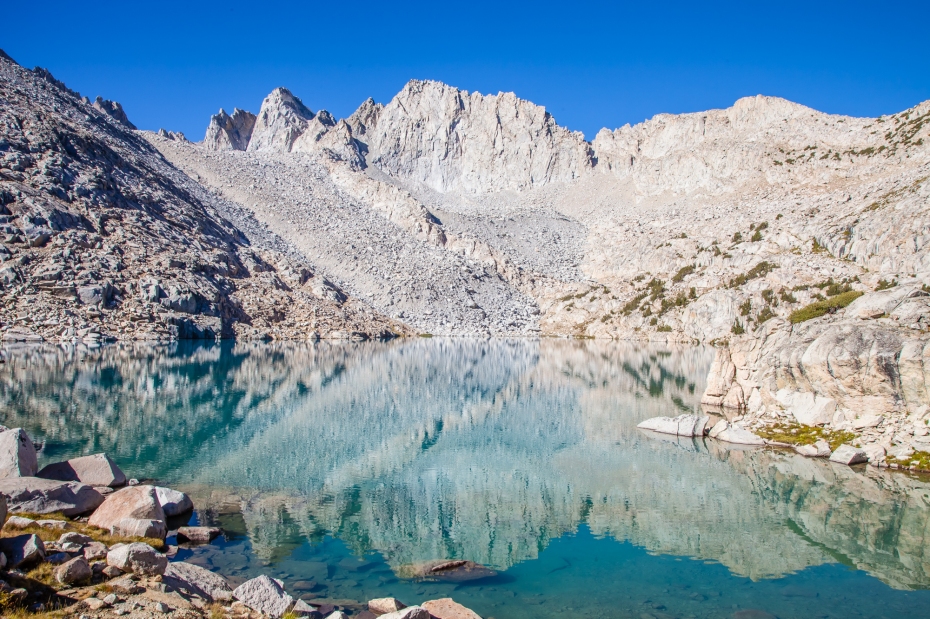 We were greeted with some fantastic views on the way back down towards the Baboon Lakes, which helped ease the blow of having to head out of such amazing wilderness so soon. 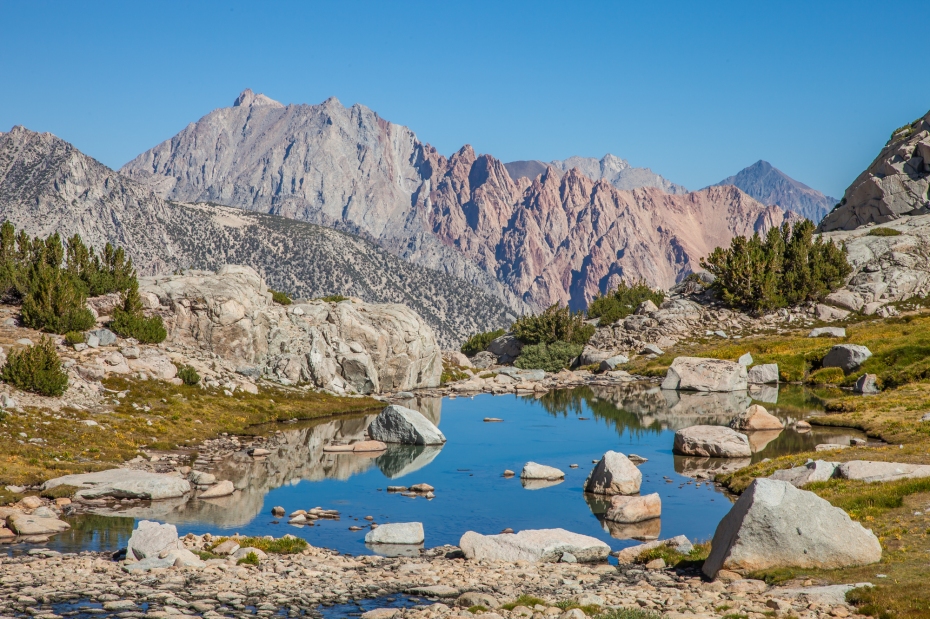 Once we returned to camp, we packed up and began our return to civilization. On our way down were able to find a series of cairns which led us on a different route than our ascent. Admittedly, this route ended up being easier than the way we had gone on the way up, but the terrain is forgiving enough to allow for a wide choice of options when choosing a route.

After hiking off trail with full packs for awhile, our return to a well graded, flat path was met with a sense of relief by our weary feet. We coasted down the mountain along the familiar path back to our car, passing Blue Lake and Lake Sabrina along the way. 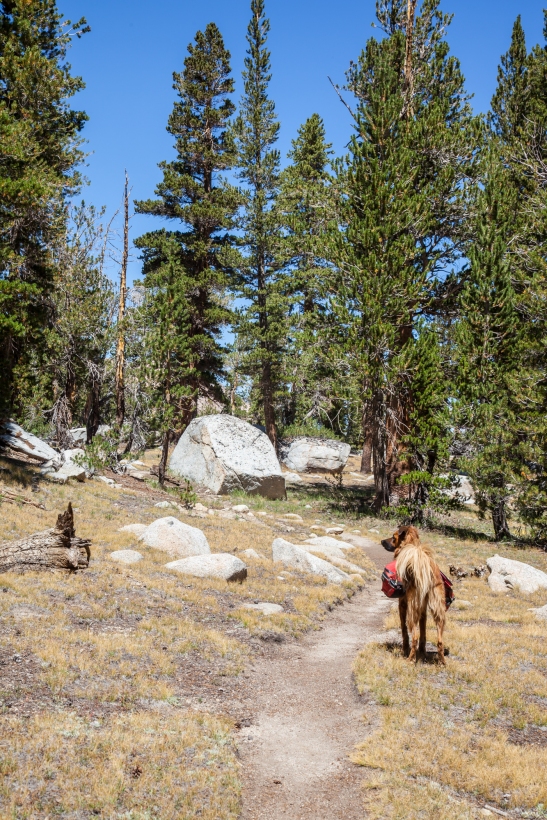 We were back at the car by 1, with plenty of time to get back to Los Angeles and re-enter society before the weekend drew to a close. It’s always tough to leave the Sierra, but in a little over 30 hours we had fulfilled our goals of escaping the confines of life in the city, reconnecting with nature, and exploring the great state of California. We can’t wait to do it again and again. Thankfully the state is bigger than our calendar.

15 thoughts on “Hiking the Baboon Lakes in Lake Sabrina Basin”