This trip turned out to be a bit of a disaster. The entire point of the hike was to make it up to Finger Lake and check out Middle Palisade towering above the South Fork drainage, but we never made it that far.

Callie and I headed out of Los Angeles at 5:30AM hoping to get an early start on the trail. Our intent was of no use as we ran into a literal roadblock along the way. Highway 14 was completely closed off, and we had to detour out to Agua Dulce with a line of traffic before returning back to the highway. Furthermore, there was an inexplicably long wait at the Lone Pine permit office that made the visit take over a half hour.

Given the delays, by the time we hit the trail it was already 11AM and the summer sun was beating down. The hour that was unexpectedly wasted would have made a huge difference. I also made an error in judgement as well. The backpackers parking lot for Big Pine is actually quite a bit down the road from the regular lot. There is a trail that heads out of the backpackers lot that heads along the northern slope of the canyon. We took to the trail without giving it much thought. 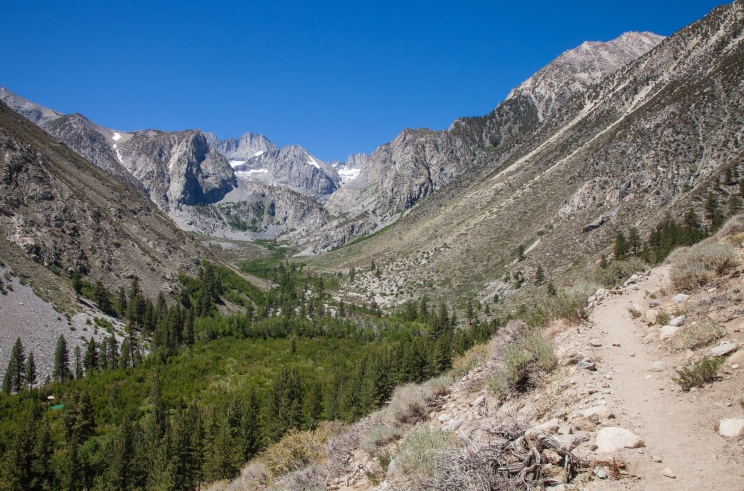 Riss and I have hiked up this trail on a backpacking trip up the North Fork, so I should have been able to foresee my mistake. In a nutshell, the trail from the backpackers lot ascends up a dry, exposed hill for almost a mile before it finally reaches the North Fork. At 8,000 feet at the edge of Owens Valley, it is a hot stretch of trail, and there is almost no shade on the entire stretch. Additionally, it ascends about 300 feet of unnecessary elevation if you are heading to the South Fork. It would have been far easier to hike along the road to the day hikers trail head. By the time we reached the South Fork trail, I was already getting a bit worn down from the heat and the hike had only just started. The next few miles of trail are equally exposed to the sun. 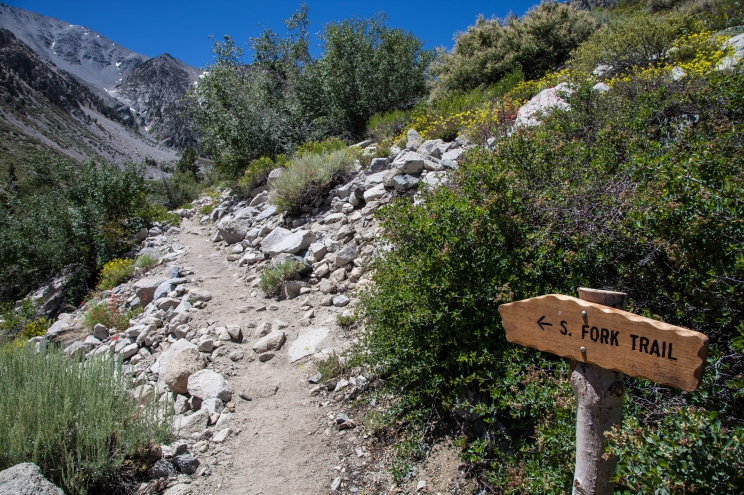 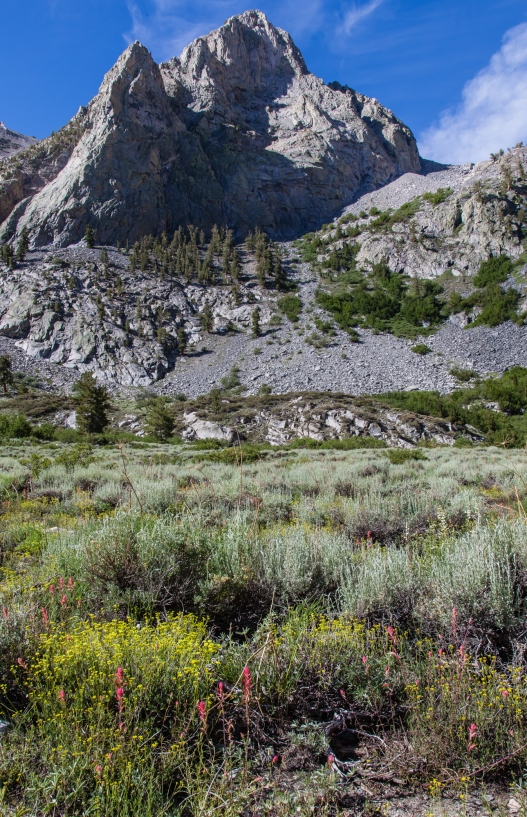 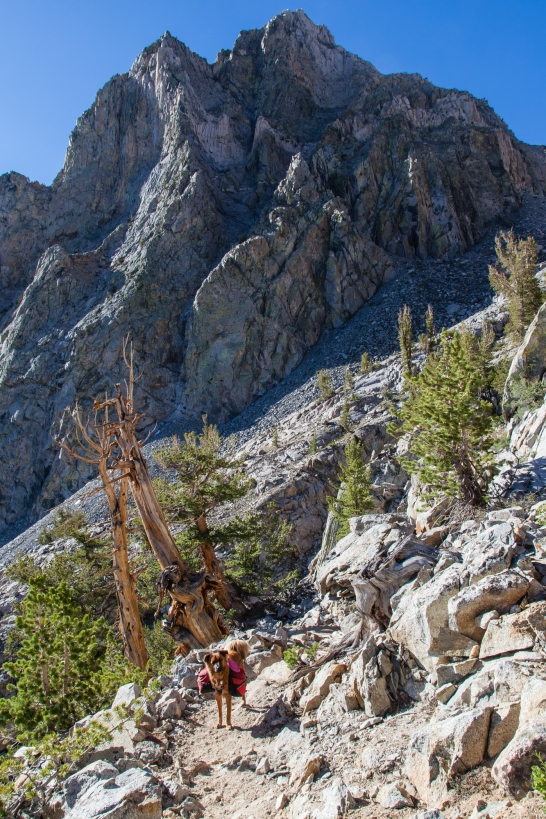 Despite not feeling very well, our late start and the constant sun exposure caused me to forego taking many break stops and I tried to just push up the canyon. I am not in great shape right now, I don’t do very well in the heat, and I had given myself no time to acclimate, so this was as stupid idea. Before long, I was feeling nauseous and I had essentially given myself some mild altitude sickness. I took some breaks and forced myself to hydrate more, but I wasn’t able to fully recover. At this point, I knew that descending back to the car was the only way to fully fix my issues, but I also felt comfortable to continue to head upwards in my somewhat weakened state. It felt like a better alternative than abandoning the trip.

Once I slowed down my pace and the trail offered a bit more shade, the trip appeared to be salvageable. Going over the saddle that exposes the upper areas to the South Fork was the familiar giddy experience of seeing a new part of the Sierra for the first time. It is a beautiful area that clearly demands much more time than I had to offer on this short trip. 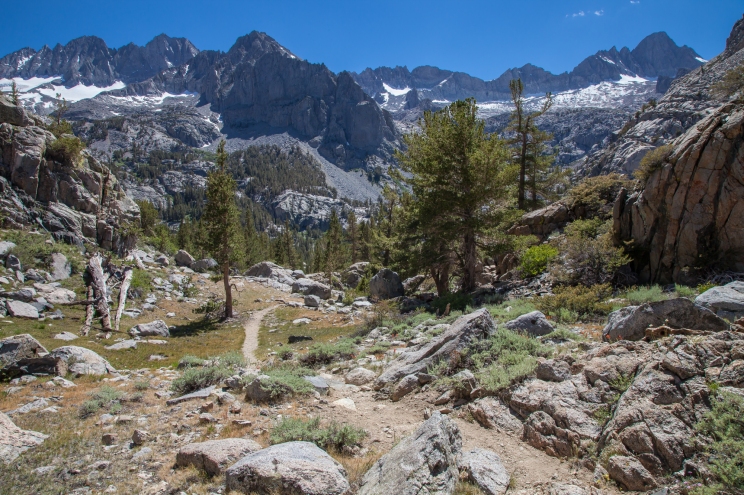 Once we reached the bottom of the hill, the environment became marshy and the bugs began swarming. We had reached phase two of our disaster.

I fully expected to deal with mosquitoes on this trip, but they surpassed my worst predictions. From this point, we had no respite from them for the rest of the day. Fortunately, my clothing protects me adequately from the skeeters, but Callie has some exposed spots that she can’t protect while she is hiking. We worked our way up the wooded trail towards Brainard Lake, but our pace was never fast enough to lose the swarm of bugs that had joined our party.

By the time we reached Brainard, it was late afternoon and there was only about an hour left of light that would be hitting the lake. I was still feeling beat and Callie was getting progressively more chewed up, so I decided to make camp on a ridge above the lake in hopes that some wind would provide some sanctuary from the bugs.

I headed down to the lake to get some photos of it before the light faded for the evening. Like many of the lakes in the Big Pine area, Brainard Lake is primarily fed glacial water, which gives the lake an aqua blue color. It’s a rare sight for California, and one I fear will not be around for too much longer. If Glacier National Park could be stripped of all of its glaciers in the next 20 years, how long do the glaciers around the Palisades have left?

It turned out to be a warm and calm night in the Sierra, and the bugs never relented. While I set up camp, I put my rain jacket over Callie to provide her some protection. I wished I had an extra headnet, as she should would have gladly accepted it. Poor pup.

I ended up eating dinner in the tent and cleaned up well after sunset when the bugs had dissipated a bit. That night, I finished “The Last Season”, a perfect read in the High Sierra. I found that the book was more about Randy Morgenson’s unmatched love of the Sierra than the search for his body. Reading excerpts from his ranger logbooks, it is hard to not have some of his enthusiasm for the high country rub off on you. I wonder if he had been able to find a harmonious way to exist among mosquitoes, or if he had wisely learned when and where to avoid them on his patrols, something that I clearly could use some practice with.

Neither of us got much sleep that night. The balmy evening made my 15 degree down sleeping bag overkill, and Callie was constantly getting up to scratch the multitude of bites hidden underneath her fur. I still hoped to reach Finger Lake and somewhat salvage the trip, so we got up at first light to hopefully have a window of relief to hike up. We were swarmed immediately. I had never been swarmed by bugs before 6AM in the High Sierra, and at this point it was an easy decision to pack up and descend the mountain.

We were on the trail before 7, and the bugs followed us all the way down to the saddle where we first ran into them the day before. I managed to snap a few photos on the descent between Brainard and Willow Lake. 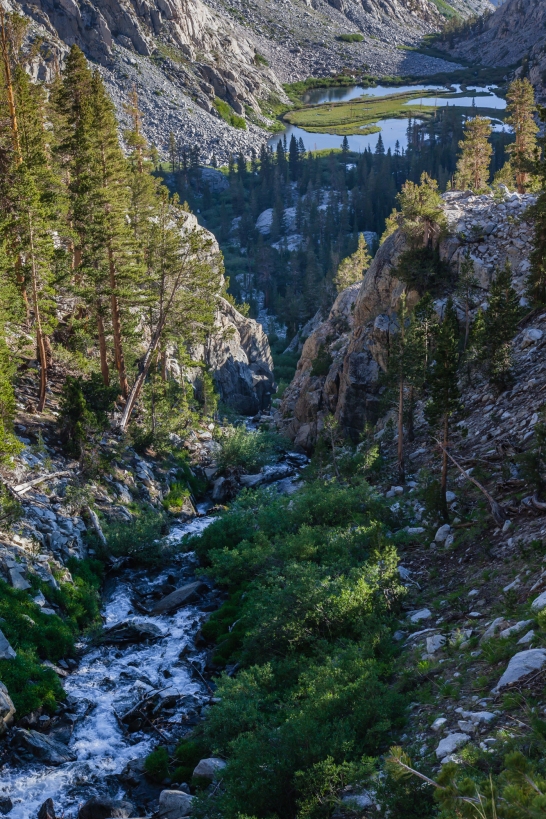 Once we got on the northern side of the saddle, the mosquitoes were gone and I was able to relax for the first time in awhile. The final few miles were thankfully a relaxing stroll and the perils of the previous day were no longer an issue. Callie seemed in much better spirits once the bugs were gone as well.

When we reached the South Fork crossing, Callie began to act as if she was planning to ford the river. She hates when I pick up her up with the handle of her harness, “like a piece of luggage” as we normally say. So, she tries to prove she can do things on her own when she thinks that she’s going to be picked up. I had to quickly get her to back off the river because it was deep and swift enough to carry her downstream in an instant. Pretty bold for a dog that is afraid to swim! 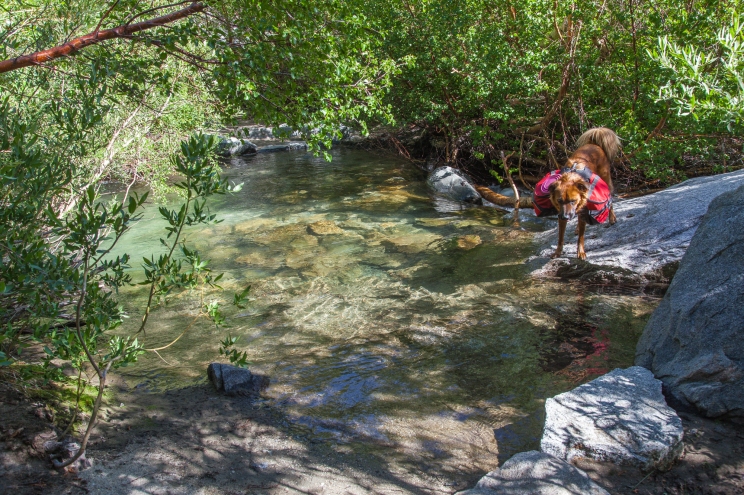 Further down the river I spotted a long snake and snapped the obligatory wildlife photo for the trip. 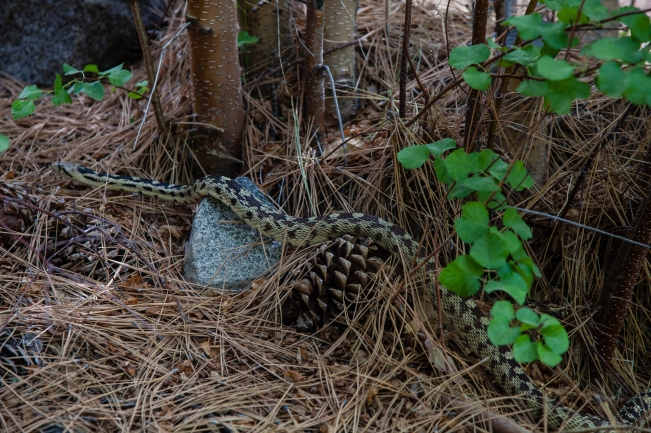 We walked down the road along the river and were back at the car by 10:30AM. It was very early to be returning back to LA but home seemed like a nice place to be after the previous days ordeals.

I consider myself to be a fairly experienced backpacker, but by no means an expert. Since I am self taught, most of my knowledge has come at the expense of trips like this where things didn’t go well. Based on my own experience, I now have solid evidence that over-exerting myself in the heat is a surefire way to give myself AMS. Additionally, I went into the trip with a predetermined goal and even after I had been delayed a very important hour, I chose to stick to my original plan instead of improvise. Both of these lessons will be applied to my future trips, and hopefully they can be useful to others as well.