Callie and I went back to the Eastern Sierra for another overnighter this past weekend. This time our destination was the Sabrina Basin, a popular hiking area near Bishop. We were blessed with great weather and a surprising lack of crowds on the trail.

Arriving at the trailhead at Lake Sabrina, I was happily surprised to find that the area was completely empty. It was 8AM on a Saturday morning and the lack of people was inexplicable. Previous experiences on the Sabrina trail had shown that this is a popular destination that is normally crowded with dayhikers.

As we started our way down the trail, there were no hikers in sight and our good fortune began to become clear. We had the trail all to ourselves.

The weather was a little cool to begin with, but as the sun rose it quickly warmed up and felt like a typically perfect Sierra summer day. There were no clouds in the sky to be seen. This is the type of weather that is ideal for hiking and camping, but it unfortunately does not produce very dramatic photography. A fair compromise I suppose. I surely wasn’t going to complain about being in the Sierra on a warm sunny day.

After about a mile of walking along a relatively flat trail next to Lake Sabrina, we passed the trail junction to George Lake at which point the trail began to ascend towards Blue Lake. 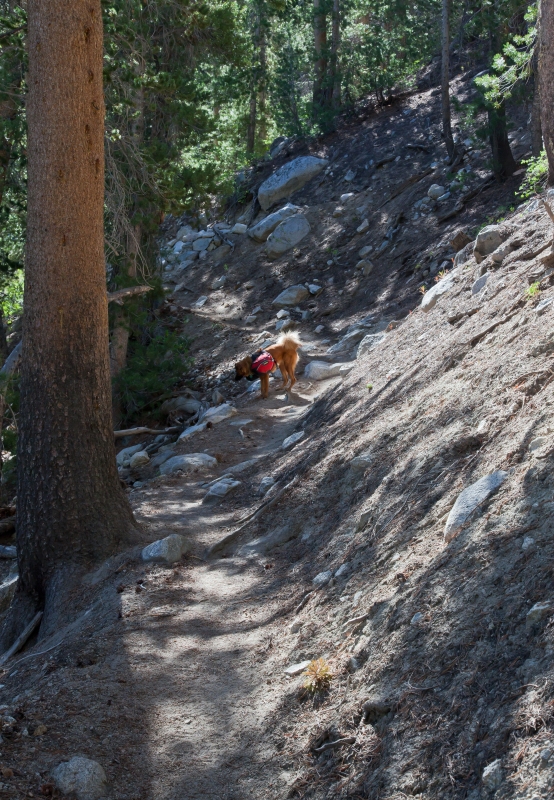 The stretch of trail here is very well made, with a number of areas featuring granite steps that switchback up the mountain.

The majority of the ascent to Blue Lake is in a forested area that provides sun protection while blocking views of the surrounding peaks. It eventually opens up a bit as you get closer to Blue Lake.

There was a great view of the moon setting over the ridge to the West as we hiked up the slope.

After a couple hours of hiking we had arrived at Blue Lake. The clear blue skies reflecting off the water certainly made the name seem fitting, but at the same time aren’t most lakes in the Sierra blue? I think whoever named this lake kinda mailed it in.

Once you arrive at the lake, you are given a great view of the prominent mountains in the area. The backdrop behind the lake quickly rises up to a basin that is surrounded by peaks reaching higher than 13k feet. There is a trail that continues up to this area and hits Baboon and Donkey lakes. It looked very inviting, and I made a mental note to add the trail to my ever growing list of Sierra locations I would like to explore.

After about 20 minutes of relaxing by the lake, some dayhikers arrived – the first ones I’d seen all day. I quickly returned to the trail, letting them enjoy the beautiful view by themselves while preserving my own sense of solitude.

As the trail darted through the woods, we came across a small stream with a well framed mountain popping up through the trees as a backdrop. I tried my best to get a good portrait of Callie, but she turned her nose up at the prospect.

Soon, we arrived at Dingleberry Lake and within a few seconds after stopping I had recieved my first mosquito bite of the year. The decision to press ahead was easily made. The area directly past Dingleberry was a fairly flat meadow with a number of rivers moving through it. The recent snowmelt made some sections of the meadow into small swamps, which explained the sudden presence of mosquitoes.

After moving through the marshy meadow, the trail began to change shape and it morphed into being predominantly granite, with the proper route marked by cairns.

Having never been in this area, I frequently had to look around to figure out where the trail was when exiting these granite areas. Small snow patches obscured the trail in a few places as well. Callie, as usual, stopped at every one and cooled her paws.

In one stretch, I saw no cairns or evidence of the trail, and after a few minutes I headed directly up the basin figuring I would re-unite with the trail eventually.

After moving up offtrail for a few minutes, I saw the trail again. It was down to our left, about 20 feet below us off a ledge. Doh! After canvassing the area a bit, we found a spot to clamber our way down to the trail. I tried to grab Callie to carry her over a big drop, but she averted my attempt and jumped off a 4 foot boulder, pack and all. I used a harsh tone to try to make her realize that big jumps were a bad idea with a pack on, but on the inside I was proud of my brave mountain dog.

Re-united with the trail, we continued up along a nice stream with a tiny waterfall flowing in from the mountain on the right. The water was extremely clear and shallow, making the rocks on the riverbed appear to pop right out of the river. Soon afterwards, we reached a lake, and a moment of confusion set in. Did we miss a junction? What lake are we at? I sat for a moment looking at my map trying to figure out what had happened when a friendly day hiker approached me. We quickly exchanged pleasantries and he mentioned that he had just been by Hungry Packer Lake, which was near my destination. It quickly became clear that I had passed the trail junction while I was offtrail, and had unknowingly made a side trip up to Midnight Lake upon getting back on trail.

The mistake was innocuous though, as I had planned on visiting the spot anyways. The lake proved to be a nice setting, with a granite slope dropping directly into the lake on the Western side, complete with a jagged ridge right behind it.

As I enjoyed the setting and experimented with different photographic possibilities, Callie took a quick afternoon nap. 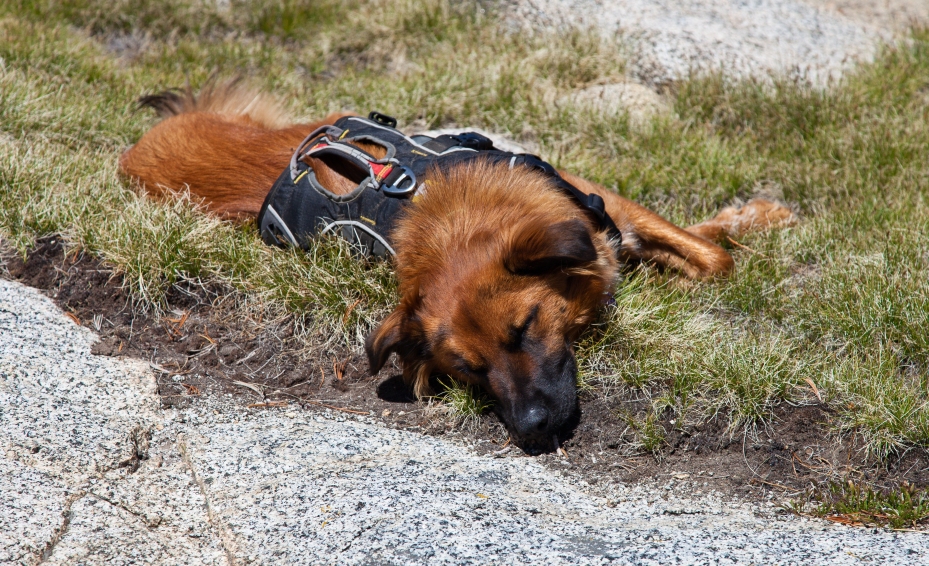 We hiked back down, and made a right when we reached the trail junction to head towards Hungry Packer lake. After a short climb, the view from the trail opened up to expose a small valley filled with various rivers rolling through. On the opposite side of the valley, Moonlight Falls could be seen flowing down the granite face into one of the rivers. 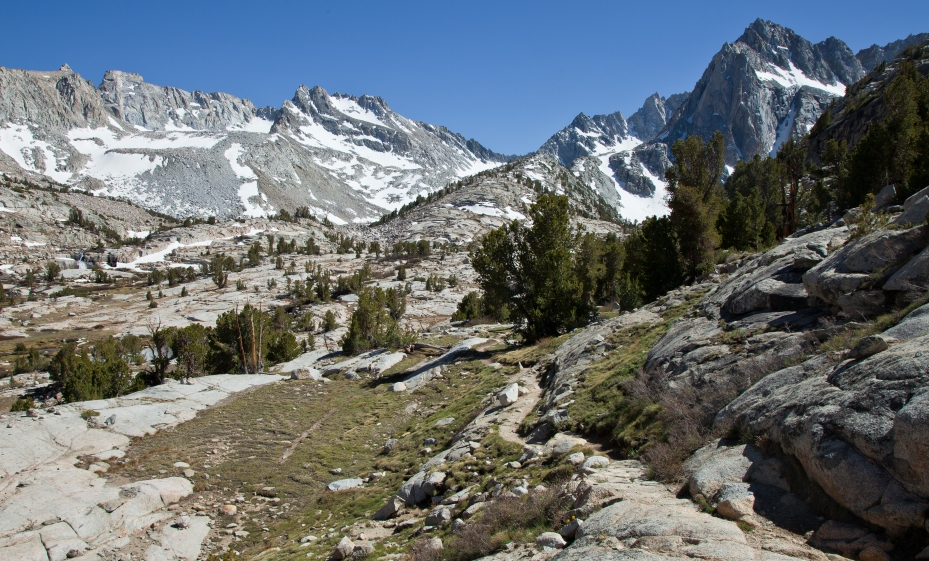 We followed the trail up towards Hungry Packer Lake. As we moved along small streams flowing down the mountainside, the outline of Picture Peak began looming overhead and dominating the view. The peak, like Blue Lake, lived up to its name.

The full presence of the mountain becomes clear upon reaching Hungry Packer Lake. Here, it is seen shooting nearly vertically out of the lake up to its impressive peak. The dramatic backdrop was reminscent of the Temple Crag that looms over Second Lake near Big Pine Creek. To the right of the peak, there is a sheer cliff that appears to be at least 300 feet high, complete with a waterfall dropping vertically off the right side of it into the lake. It was one of the most dramatic locations I’ve had the priveledge of seeing in the Sierra, though I’m always blown away by the Sierra landscape so take my comments with a grain of salt 🙂

A pair of backpackers arrived at the lake, which signaled it was time to move on to the next location. This was only the third group we’d seen all day, and I wanted to keep our streak of solitude alive. Plus, the sun was getting close to ducking behind the mountain ridgeline, and it was time to find our campsite.

We moved offtrail away from the lake and began working to figure out how to manage to get across the river valley to Moonlight Falls.

I moved across the valley on the southern side and managed a few tricky river crossings without having to put on river shoes. It was a slight pain to climb around, especially with Callie in tow, but after about 15 minutes we had arrived at Moonlight Falls. The location was just as beautiful as I’d hoped. I took a load off and began to relax and read. The Kindle has proven to be an indispensible luxury item on these trips, allowing me to have access to an entire library of books for only a few ounces.

I wasn’t sure if late afternoon light would be ideal for this location, so I patiently hung out for the rest of the day enjoying the beautiful scene. The sunset light didn’t end up working for Moonlight Falls, but I could see the ridge behind the falls getting lit up close to the end of the day. I plan to return to the area in the future to check out the lakes behind Moonlight Falls at sunset, not that I needed an excuse to return to this magical place.

I enjoyed a standard backpacking dinner of instant mashed potatoes and bourbon. The sound of the waterfall drowned out any noise or thought as I sat peacefully in the middle of the basin.

The light began to fade as we transitioned into night, and I hoped to enjoy the view for awhile longer from our camp. Callie was very suspicious of the moving light and began barking at different directions when she thought she saw something. I couldn’t help but take her seriously each time, wondering if a frienly bear was trying to pay us a visit. After a few repetitions of this, my paranoia began creeping up and it was time to retire to the tent for the night.

I awoke to my alarm at 5:15 the following morning and took a short stroll over to the river next to my camp to shoot sunrise. I had scoped out a composition that featured the waterfall with Picture Peak and the surround ridge behind it, and I hoped that the ridge would catch some of the early morning light. As the sun broke, the top of the mountains glowed a brilliantly bright red.

Feeling comfortable with the results of the Moonlight Falls shot, it was time to venture elsewhere. I packed up a few things and began to explore the area surrounding my campsite. The abundance of water in this area provides a wealth of opportunities to shoot reflections on the surrounding peaks. I fixated on a few locations trying to capture the reflection of Picture Peak in the early morning light. 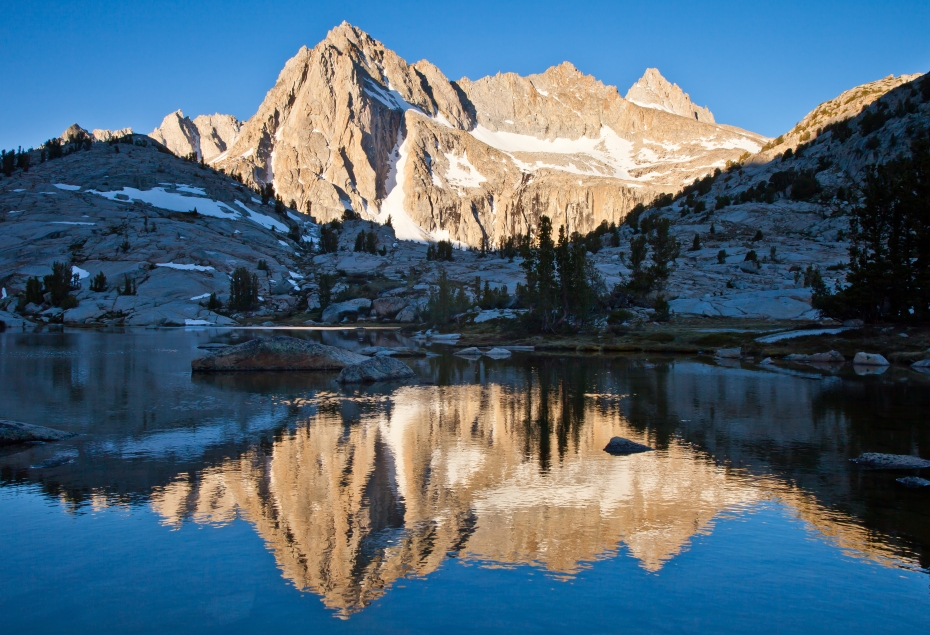 After the morning photography session, we began walking back towards camp. Suddenly, Callie became posessed and began sprinting around the area surrounding me, jumping off boulders, prancing through rivers and snow, and covering a ton of distance in the process. It was one of the most energetic and jubilant displays I’ve ever seen. I like to think that she was overcome with inspiration from such a beautiful Sierra sunrise, but more likely it was due to her being a dog.

The rest of the trip was non-eventful. The peacefulness on the trail we has achieved on Saturday was gone on Sunday. After running into people only 3 times on Saturday, I ran into about 15 different groups on Sunday, including a group of people camping directly on the trail by Dingleberry Lake. Sigh. Noobs.

As always, I look forward to the different views you get when hiking a stretch of trail in the opposite direction, and for a brief stretch after Blue Lake there was a great view of the red mountains next to North Lake popping up behind the granite slopes next to Lake Sabrina. The contrast of color and geology was a beautiful sight, and a fitting view to finish the weekend with. 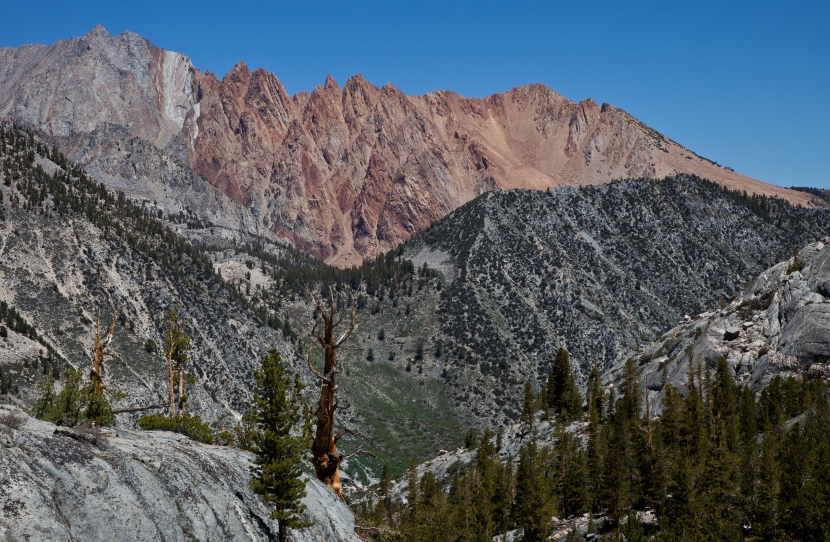