Tucked away in the empty stretch of desert between Las Vegas and Los Angeles, the Mojave National Preserve is the perfect escape for people looking to take a break from civilization. 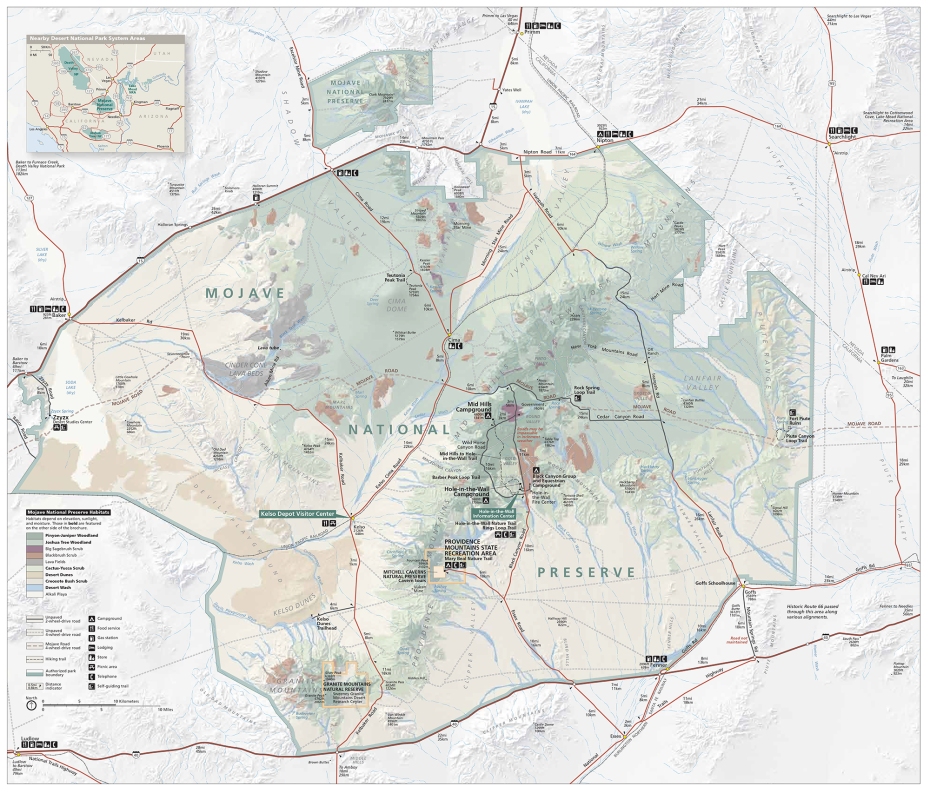 We were halfway between Baker and the Nevada border when the views set in. The desert road that we were driving down seemed to stretch into oblivion, vanishing into the mouth of an abandoned mountain landscape. Surrounding us was some of the most geologically diverse and scenic land in the California desert.

This was our first trip into the Mojave National Preserve, so we naturally wanted to get the lay of the land by giving ourselves a tour of the area. We entered the Preserve from the north via Ivanpah Road and began exploring its eastern side.

As we approached the New York Mountains, we became surrounded by a forest of Joshua Trees and more intimate views of the nearby peaks. The road transitioned to a well graded dirt road, which could be easily driven via any car, but we only saw a few for the next couple of hours.

The area of the preserve near the New York Mountains is quite pretty and features a distinct sense of isolation, which made it the highlight of our short tour around the east side of the preserve. 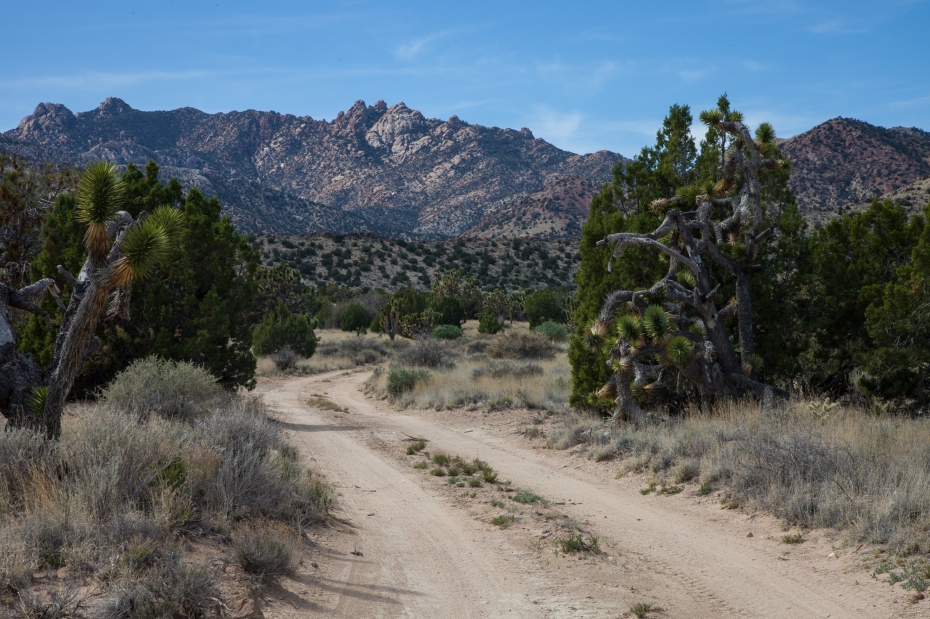 Next, we made our way down to Hole in the Wall and explored the surrounding region for a bit. This area has the only developed campground in the Preserve, which was already full or close to it by mid day on a Saturday. Fortunately, we had other plans in mind for the night.

The main attraction in the Hole in the Wall area is The Rings Trail. This trail carves through some steep class 3 sections of the canyon, which requires hikers to use rings bolted into the rock in order to traverse the trail. We had Callie with us, so the trail was off limits for our group. The area is still beautiful though and worth a stop if you are nearby, even if you are limited to where your dog can go. 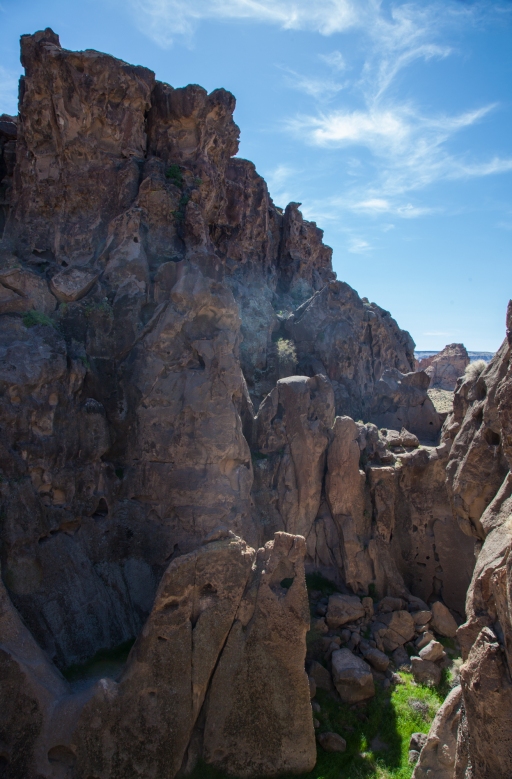 Honestly, the terrain out in the Mojave is not very friendly towards dogs, even if it is legally one of the only interesting desert areas in California that allows dogs on the trail. This was a foreign environment for Callie, and we found ourselves having to monitor her and adjust to her limitations for the first time in her life as a trail dog.

Our next stop was the Kelso Dunes, a unique and remote set of dunes that reaches heights over 600 feet tall. This is undoubtedly the highlight of the preserve, and one of the main reasons we decided to make the drive from Los Angeles. Death Valley has a couple of equally impressive areas of dunes, but I don’t know of any other area in the US where you can legally hike with your dog on a system of dunes like this. 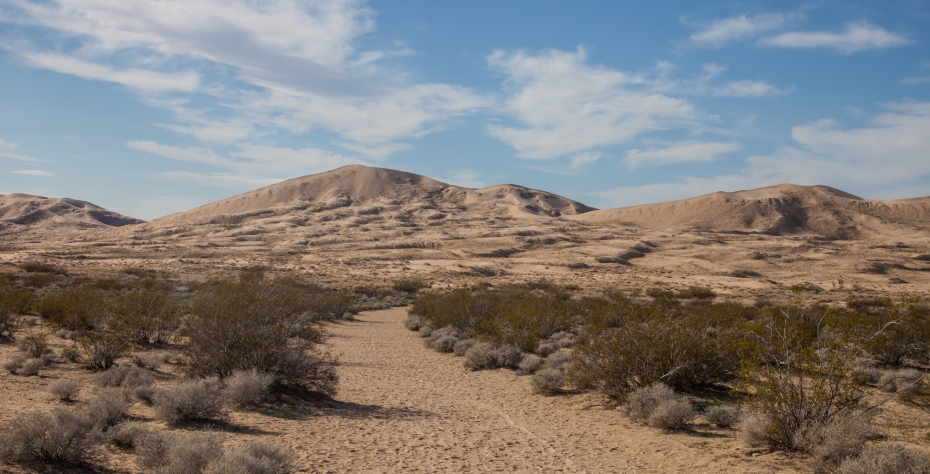 The hike from the trailhead to the top of the dunes is around 3 miles round trip, and the majority of that distance is covered via a relatively flat path that heads through the border area of the dunes. Like all areas of the park, dogs are required to be on leash.

After the flat approach to the dunes, the footpath wastes no time and ascends directly up the slope of the dune. It’s a tough ascent due to the soft, deep sand, and it feels like you slide back down a foot for every few feet that you ascend.

Once you reach the ridge line of the dunes, the view improves dramatically. The expanse of the dunes to the north opens up, and the backbone of the dunes is easily seen snaking down to the desert floor.

From the ridge, it’s a short walk to the “summit” of the dunes. It is absolutely gorgeous up there, and we took a moment to soak in the views of the sun hovering over the expansive emptiness before us. This is a great place for sunset photography, and that was our initial plan.

However, the wind was blowing pretty steadily up on the top of the dunes, and poor Callie kept getting sand blown into her eyes. We tried to teach her to turn around and face away from the wind, but she stubbornly wanted to look wherever we were looking. We couldn’t help but pity our poor pup, so we began our return to the car earlier than expected.

The Kelso Dunes are one of the few systems of dunes in the world that showcase the phenomenon known as “booming dunes.” In very dry conditions, if you slide down the dune slowly, you can hear and feel a low frequency rumble in the dunes. I first experienced this at the Eureka Dunes in Death Valley, which is the only other place in California where this anomaly occurs.

There is a slope that descends down from the summit of Kelso on a steeper, more direct slope that is the ideal spot to try to experience the singing sand for yourself. As we made our way back to the car, the sun set over the dunes and provided a beautiful view to cap the day. Even though we had to scale back our plans a little bit for Callie, the hike still ended on a perfect note.

Next, it was time for us to find a place to camp. The general rule in Mojave is that camping is legal in any area that has “been traditionally used for that purpose and that has an existing fire ring.” A list of some recommended areas can be found here. There were a number of spots at Kelso Dunes, but they were fairly close together and a few of them were occupied.

We still felt like we could achieve more solitude than that, so we headed up north in search of a more private location. We ended up right across the street from the trailhead to Teutonia Peak, which was our destination for the following morning. We cowboy camped next to an outcropping of rocks, surrounded by one of the largest and densest forest of Joshua Trees in the world, and we had it all to ourselves. No permits or fees required. Mission accomplished!

After a leisurely start at our fantastic campsite the following morning, we drove a couple hundred feet to the Teutonia Peak trailhead. This is one of the only trails in the park, and it does not disappoint. The first section carves through the Shadow Valley forest of Joshua Trees, which as I mentioned earlier is one of the largest and densest groups of Joshua Trees in the world.

The hike is short, with only about a mile and a half and 700 feet of elevation between the trailhead and summit. The first half is pretty much completely flat as it traverses through the forest of Joshua Trees. 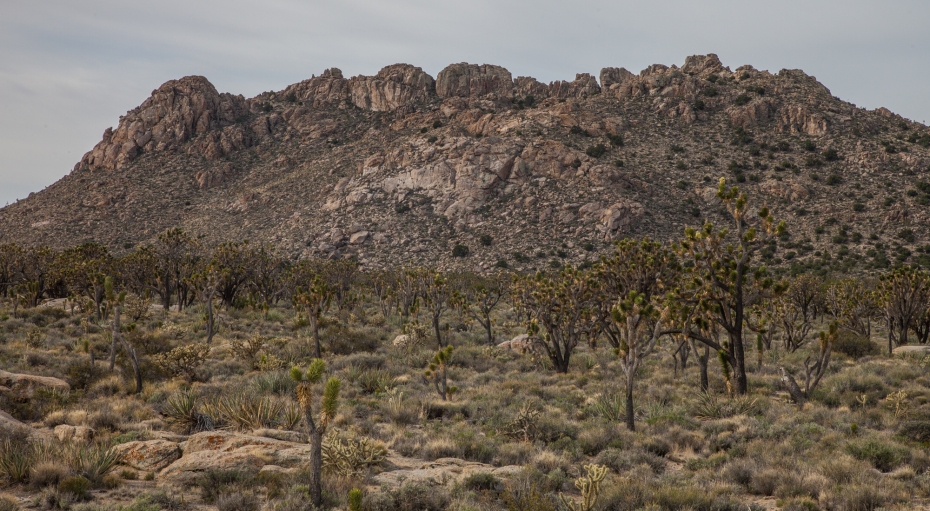 It’s a beautiful landscape, but not one that was particularly inviting to Callie, and we had to be diligent about keeping her away from all of the various desert plants vying to destroy her paws. At one point she stepped on a loose cactus bulb about the size of a grape and immediately started walking on 3 legs. We were able to assist her quickly and she was fine, but it was yet another reminder that she was not experienced or particularly welcome in hiking this type of environment. 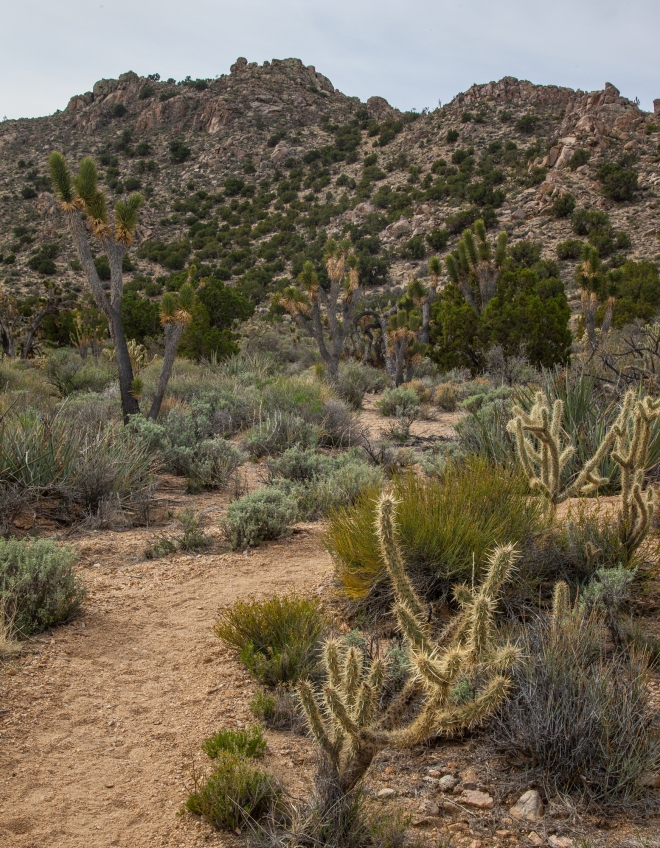 The peak is on the eastern edge of the Cima Dome, which at 70 square miles is one of the most symmetrical domes of its type in the entire world. Aren’t random geologic facts fun? As the trail begins its ascent, views of the Dome’s rugged interior open up which helps give the last section of the hike its own distinct flavor.

The trail ends abruptly at the base of a set of rocks that one can climb to reach the true summit. There is no easy or safe way to do this unless you are an experienced climber, but fortunately the views from the trail are just fine. We headed back down the way we came up and headed off for our final destination of the trip, the Mojave Lava Tube.

On Kelbaker Road, about 19 miles away from Highway 15, there is an unmarked dirt road that heads off into the desert. This unassuming road leads to one of the Preserve’s clear highlights, the Lava Tube Trail. It is baffling that the Preserve does not give motorists any indication of the attraction from the road. The only possible explanation is that getting to the Lava Tube trailhead requires driving down a somewhat rough, washboarded dirt road that some cars could struggle with. It is well worth the effort though. The road even provides some great views of a few of the cinder cones that dot the area.

The name “Lava Tube Trail” is a bit misleading. It’s a short 10 minute walk from the parking lot to the entrance of the tube, half of which is on a 4WD road. It’s not exactly a hike, but it’s a scenic area and the payoff at the end of the trail is well worth it. We weren’t sure how Callie would react to the Lava Tube, and it turns out that she had no interest in descending down into the dark tunnel. Can you blame her? The staircase that is used to enter and exit the tube was steep and tall enough that we were nervous about it too, so we supported her decision and split up. Riss later told me that Callie anxiously watched the tube the entire time I was down there. 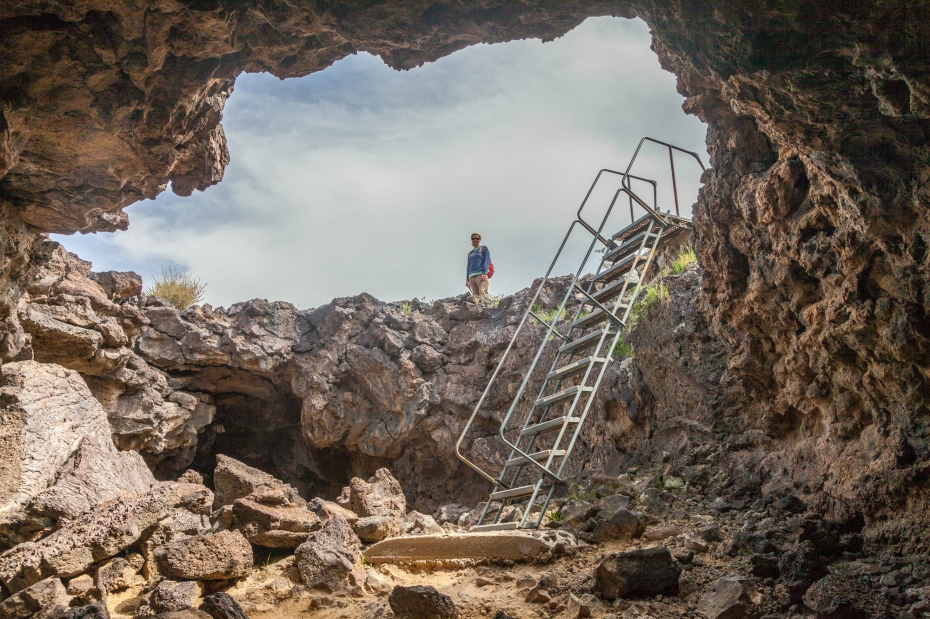 Lava Tubes are a created by a volcanic process where some rapidly moving lava cools down and solidifies on the outside, while the inside continues to flow. When the lava flow stops, the tube is emptied out and all that is left is a hollow underground tunnel. There are a lot of lava tubes in Northern California at Lava Beds National Monument and its surrounding area, but I do not know of any other easily accessible lava tubes in Southern California other than the Mojave Lava Tube. It also has the rare quality of having a few small skylights on its ceiling where shafts of light pour into the cave in the afternoon light. It’s a remarkable place.

There is one slightly claustrophobic section during the entrance and exit where you have to crawl or hunch down to get under the low profile of the cave for a few feet, but after that it opens up into a spacious cavern with spectacular natural light. The cave itself is quite small and the whole thing can be explored in a few minutes, but I could have spent hours down there exploring its photographic possibilities. I’m sure I’ll be back. 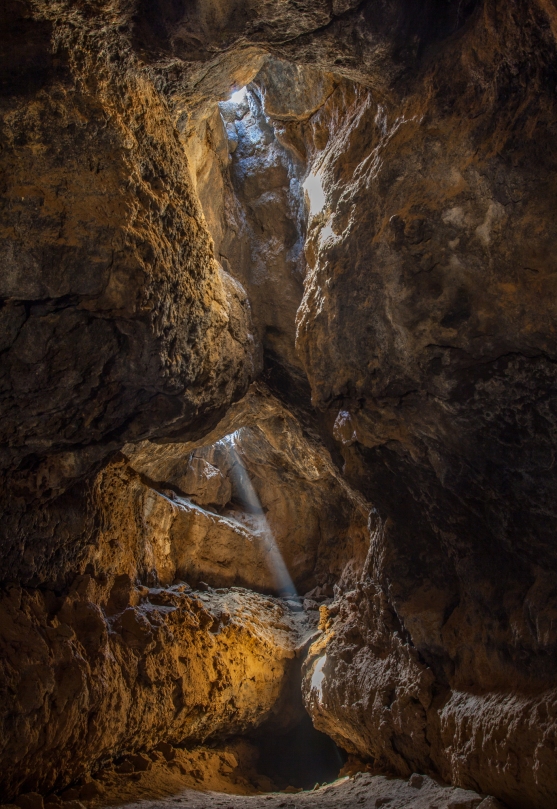 This concluded our first foray into the Mojave National Preserve. We grabbed a late lunch in Baker, and hit highway 15 for the long drive home. A couple hours later, we were stuck in gridlock in the middle of nowhere, finally experiencing the fabled weekend traffic between LA and Vegas that had eluded us for the past decade. There was a palpable contrast between that experience and the freedom we had just enjoyed in the desert, highlighting what the entire point of the trip had been. It was a worthwhile price to pay for a temporary diversion from that exact type of distraction.